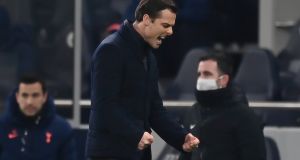 Not for the first time we can say it’s been a difficult week for Ireland manager Stephen Kenny. Two of his coaching staff departing two months before the start of World Cup qualifying is not how he would have envisaged things going and it’s another difficult situation to deal with for a manager who is becoming very used to adversity in his short Ireland career so far. What happens away to Serbia and at home to Luxembourg in March could determine a lot of the public feeling towards Kenny but Emmet Malone writes this morning that the former Dundalk manager’s long-term value to the domestic game means he’s worth sticking with. In England, the hastily re-arranged Premier League meeting between Tottenham and Fulham saw José Mourinho’s side let an opponent off the hook again as the visitors equalised late on to earn a point. In the earlier match Manchester City moved within four points of Manchester United with a game in hand thanks to a goal from Phil Foden to see off a stubborn Brighton side.

Moving stateside now and Dave Hannigan writes in his column this morning that the Tampa Bay Buccaneers and Tom Brady are turning a blind eye to Antonio Brown’s shameful past as the man accused of sexual assault plays a key part in their playoff run. “If the physical gifts that made Brown arguably the best wide receiver of his generation and earned him more than $70m appear more or less intact, there also seems a legitimate case against him being anywhere near the field at all,” he writes.

9 More than 400,000 summer holiday bookings may be in jeopardy

10 ‘Horrendously out of proportion’: Residents set against 19-storey apartments

13 ‘I think my husband has a drug problem, but he says that’s nonsense’

16 Range Rover Sport D350: Fab to drive. But everyone you pass will hate you

19 Michael Harding: Just after Christmas, I began talking to the birds

20 Róisín Ingle: The gin is now part of my daily routine

21 The chickpea stew that broke the internet in the US is here. Give it a go

23 Kathy Sheridan: Pandemic is reminder of poison in British and Irish politics

24 Joe Biden can bring either unity or change – not both

25 Q&A: What are the new Covid travel rules and how will they work?

33 A sizzling recipe to convert the sceptics

39 Gordon D’Arcy: Irish lineout has to move past mess of 2020 for the Six Nations