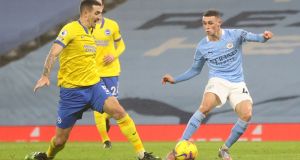 Manchester City are now 14 matches unbeaten, the scoreline of this win not reflecting the conveyor-belt of chances they created. At the end all that separated the sides was Phil Foden’s impressive goal near half-time – the substitute Raheem Sterling blasting an added-time penalty over – and as Brighton had seriously pressed as the final whistle approached City ended relieved to claim a vital three points.

This was the first of the two games Pep Guardiola’s side had in hand and in winning they rise to 32 points, four behind the leaders, Manchester United.

For this match against opponents who arrived a place above the relegation zone, the manager did not select Sterling or Kyle Walker, who were each replacements. Yet Guardiola has imbued such a deep-rooted style within his squad it often does not matter who is selected and so João Cancelo, in for Walker, was soon joining the attack as sky blue shirts flooded the visitors’ area.

Then, a move that had Sterling’s replacement, Foden, turning the ball to Oleksandr Zinchenko ended in the left back’s shot being blocked by Adam Webster.

Graham Potter had arranged his team in a 4-3-1-2 that featured Leandro Trossard and Percy Tau at the tip. The problem they had was the regular one when facing City: how to use whatever parsimonious possession they were allowed to hurt them. They would have enough chances to hurt City but could not execute them.

A favourite move of Guardiola’s side has two or three slick passes exchanged around the area that open up a defence and create a close-range opportunity. A Kevin De Bruyne one-two with Ilkay Gündogan offered a perfect illustration: suddenly the Belgian was in on Robert Sánchez’s goal but after De Bruyne took a stride and unloaded the goalkeeper saved well.

This was an escape for Brighton and City were soon to have their own. Here, Trossard was granted time to fashion a curler that narrowly missed Ederson’s left post. It was a flash of the threat Potter’s side posed. There was another when Trossard skated along a left channel before John Stones dispossessed him and killed the danger.

City’s response was to bombard Brighton. A Riyad Mahrez diagonal was turned back from the left post towards Foden but Joel Veltman turned it away. De Bruyne stood the ball up for Mahrez near the opposite upright but his right foot let him down. Then a De Bruyne pass was touched back by a stretching Webster to Sánchez who picked it up causing Darren England, the referee, to award an indirect free-kick 10 yards out.

De Bruyne hit this at an onrushing Alexis Mac Allister but Brighton were having to concentrate relentlessly against the City wave. Even when Bernardo pickpocketed Cancelo and his team claimed a corner this was turned into a home attack: Ederson grabbed the delivery and City raced upfield, the indefatigable De Bruyne firing at Sanchez.

Finally, just before half-time, came Foden’s sweet finish, the youngster receiving a De Bruyne pass, cutting infield, then deliberately wrongfooting Sánchez by beating him at his near post with a right-foot finish. This was Foden’s 10th of the campaign, making him City’s top scorer in all competitions and despite the Premier League edict not to hug due to Covid, Stones – followed by others – was soon embracing Foden.

City continued to purr, enjoying a level of control that was akin to toying with their opponents. Foden had another attempt blocked and, moments later, the 20-year-old was denied a penalty when going down under a Veltman arm.

Next, Propper’s skid along the turf to connect with a Bernardo ball only barely missed in what was another warning that Brighton would not be bowed.

The catalogue of City attempts was next added to by Cancelo and De Bruyne before Brighton threatened towards the close. And, at the death, came Sánchez upending De Bruyne for the penalty opportunity Sterling spurned. – Guardian