Gearóid Hegarty’s All-Ireland hurling final: ‘It was like an out-of-body experience’ 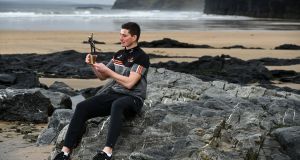 If Gearóid Hegarty keeps up this sort of talk, never mind the hurling – a lucrative post-playing career in the media awaits.

“Over Christmas you would be watching old videos and the characters that used to be in sport once upon a time,” said Hegarty after being named PwC GAA/GPA hurler of the month for December. “I saw videos of Roy Keane and Mike Tyson – now the way [Tyson] used to go on was not great but if I am sitting down at home watching a Liverpool match I wouldn’t watch the interviews before the game.

“They are just not fun to watch. In GAA or any sport, to be fair, there is no incentive for players to speak as openly as they used to do. I just find things boring.”

These Limerick hurlers do not lack for character and, unlike the Kilkenny side of yesteryear, it appears that people all over the country will know what they look and sound like before they are done collecting medals.

Twitter helps. Hegarty was asked about his tweet from underneath the Hogan stand after last month’s All-Ireland final victory over Waterford. Euphoric, having just completed a ferocious yet deadly accurate man-of-the-match performance, he picked up his iphone.

After asking his girlfriend to confirm that he had just posted 0-7 in Croke Park and wasn’t dreaming, he scrolled down to see former Tipperary corner-back Paddy Stapleton wondering did Hegarty “ever feel that one of his numerous fouls is actually a foul”.

“No,” the giant wing-forward replied.

“I just got it into my head – for a bit of craic – I would send out a tweet and see what happens. It blew up. To be honest, I didn’t expect it to blow up. I can’t even remember sending the tweet. ‘Cause, you know, it was really close after winning the match. You are on such a high, such a buzz.

“I think it went down well enough. I didn’t mean it in a bad way at all but I did mean it.

“I did mean it,” he repeated, “just not in a negative sense towards Paddy. I don’t know Paddy but he was working in the school that I went to for a good few years.”

Hegarty is currently teaching his pupils in Desmond College via zoom while hoping that intercounty panels will be allowed to resume training in February.

One idea he refuses to countenance is GAA players skipping the vaccination queue.

“I don’t think that will happen, to be honest. My mother’s mother and father are elderly, living above in Kilcormac in Offaly, my nana and grandad, and they are still waiting on the vaccine. So, if I was to think I am getting a vaccine before them, there would be something seriously wrong.

“To be honest, though, I’d actually challenge that and say how many cases were actually linked to the GAA in terms of the intercounty teams training, both hurling and football?

I love hurling but I can’t do it for a full year. I would get burnt out if I was doing it consistently all the time

“I don’t pay attention to the news – my mother and father are addicted to watching it – but I know Sligo had a few cases. If you isolate that and put it up against the amount of people that would have been travelling to intercounty training, back-up staff, physios, players, all that kind of stuff and how many cases were linked to intercounty teams training, I am not sure there was that many. Can you give me any feedback on that?”

He is right but, as every elite sport and government from the NBA to South Korea has learned to a severe cost, the virus will infiltrate any regular gathering of people.

“Look, in an ideal world, it would be great if we could get the vaccine, but it’s a supply issue. There just isn’t enough of it there. I think it should be given to the people that need it more first, and that’s elderly people and that is people working on the frontline, the doctors and nurses.”

Hegarty’s sensational form in 2020 was also worthy of attention; remarkably, besides walking the dog, he has completely downed tools since putting Waterford to the sword.

“I have done a savage amount of work over the last few years and I always knew it was in me but I was just trying to get it out of me.

“But to be honest, and it’s not even in a sporting sense, it was the lockdown: I just stopped worrying about the small things . . . In the lead-up to a game I used to be worrying about every single thing. If I got a bad night’s sleep on a Wednesday before a game I’d still be thinking about it on a Sunday morning.

“I love hurling but I can’t do it for a full year. I would get burnt out if I was doing it consistently all the time. I really like resetting and taking a full break and then resetting and getting back to what I always call ‘the zone’.

“I read a book literally called In the Zone by a fella called Clyde Brolin and it is all about flow and getting into flow. I actually got a bit of slagging from the lads after the [All-Ireland final] in the dressing room because I knew I was after having a really good game, but I genuinely didn’t know what I was after scoring.”

So he asked the girlfriend.

“I remember being above in the All-Ireland final a couple of years ago and Seamus Callanan got nine points from play, and being there watching it I thought it was incredible.

“It hasn’t really sunk in with me, to be honest, in a really weird way. Maybe because the fans weren’t there. I was really in the zone. I can hardly remember some parts of the game. It was like an out-of-body experience at times. I don’t even feel like it was me.”