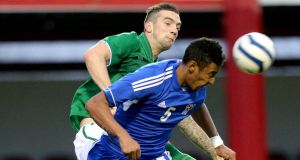 New Dundalk signing Sonni Ragnar Nattestad in action for the Faroe Islands against the Republic of Ireland’s Shane Duffy during an under-21 qualifier in November 2013. Photograph: James Crombie/Inpho

Dundalk have announced the signing of Faroese international defender Sonni Ragnar Nattestad, who joins the League of Ireland side from B36 Torshavn.

The 26-year-old centre back previously had spells with Danish side FC Midtjylland and Molde in Norway, although he struggled to establish himself at either and after a season at Fredericia back in Denmark he moved home last year.

He has played more than 30 games at senior international level since making his debut in 2013.

“Sonni is a national team player with international experience,” said Dundalk boss Filippo Giovagnoli. “He’s really big, strong and physical. He is six foot six, left-footed, fast and good on the ball so he is exactly the kind of centre back we were looking for.”