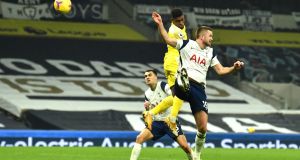 Tottenham never learn. Top of the league not so long ago, they have drifted out of the title race because of José Mourinho’s conservatism. It has become a recurring theme, yet Spurs seem unable to find the cure.

More points were frittered away despite Harry Kane giving Mourinho’s side an early lead, leaving Spurs six points off Manchester United in first place. They were careless again, letting Fulham off the hook, and have won only two of their last eight league games. Scott Parker’s side, who had asked for this fixture to be postponed on December 30th due to a Covid-19 outbreak, deserved a draw that leaves them two points behind 17th-placed Brighton.

Although Fulham had arrived in a funk, grumbling at being given only two days to prepare after a Covid outbreak forced Aston Villa to postpone their game against Spurs, they had no choice but to get on with it. In truth Parker was pushing it by calling the scheduling scandalous. This is a sport playing by the pandemic’s rules and although Fulham were entitled to feel that they deserved more notice, there is no such thing as perfection these days.

Mourinho certainly had little sympathy with Fulham’s complaints and although he shared a good-natured exchange with Parker just before kick-off, he was in no mood to show mercy. Spurs were determined to make their reluctant guests suffer, searching for signs of rustiness, threatening to overwhelm Fulham with a series of cutting raids down the flanks during the first half.

Although Fulham were set up in a cautious 3-5-2 system, they looked vulnerable whenever Spurs raised the tempo. Mourinho wanted his full backs high and wide, attacking the space behind Parker’s wing backs, and whipping in crosses for Kane and Son Heung-min. The tactic was effective throughout the opening period and it should have led to a goal in the sixth minute, Serge Aurier’s cutback reaching Sergio Reguilón, who fired over from close range.

Spurs should have been out of sight at the interval. Alphonse Areola was in inspired form in the Fulham goal, making two outstanding saves to deny Son. Tosin Adarabioyo was forced into last-ditch action too, sliding in to deny Kane just as the striker threatened to break clear.

Fulham were living dangerously and it came as little surprise when they cracked, their organisation evaporating when Reguilón broke down the left, bursting beyond Kenny Tete and delivering a peach of a cross for Kane to head past Areola.

The worry for Spurs was that they would end up regretting their profligacy. Although Fulham were outplayed for long spells, the visitors flickered in attack at times. Fulham had not played a league game since St Stephen’s Day, but they have developed a solid work ethic under Parker and were diligent in their approach, battling in midfield and attempting to catch Spurs out with precise counterattacks.

Harrison Reed was a scrappy presence in midfield. Andre-Frank Zambo Anguissa offered a languid quality on the ball, showing quick feet to make space for a shot that Hugo Lloris pushed to safety when the game was goalless. Ruben Loftus-Cheek, still to discover his best form since arriving on loan from Chelsea, almost equalised with a volley that crept just wide.

There were times, however, when the game passed Loftus-Cheek by at the tip of Fulham’s midfield. With Aleksandar Mitrovic absent from the squad, Fulham were being held back a familiar failing, their lack of bite in the final third. Ivan Cavaleiro and Bobby Decordova-Reid were being contained by Eric Dier and Davinson Sánchez, the Spurs centre backs, and Tete was wasteful with a rare opportunity at the start of the second half, blazing wide when a cross would have been a wiser choice.

But the longer it stayed 1-0, the bolder Fulham became. Spurs had fallen into bad habits, inviting pressure. Fulham were controlling possession and Parker, sensing that the mood had changed, strengthened his attack by introducing Ademola Lookman, who immediately caused problems on the left.

Spurs retreated, restricting themselves to counterattacks. Their nerviness increased when a swift break ended with Son scuffing against the woodwork.

The narrative was forming. Son looked aghast and Fulham eventually punished Spurs when Lookman turned Aurier inside out before crossing for Cavaleiro to head home. Fulham ended up enjoying their last-minute invitation to north London. – Guardian