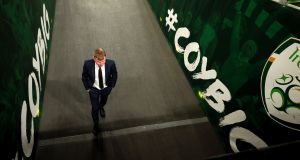 There has been a fair amount of schadenfreude these past few weeks with regard to just how ill equipped the British government has been to deal with the giant hole it dug for itself with regard to Brexit.

Ministers back-tracking on commitments, truck drivers requiring permits even to enter English counties containing ports and fishermen realising that having got to take back far less control of their waters than had been promised, they now face almost insurmountable barriers when it comes to selling their catch to France.

Ireland, though, is just waking up to some of the challenges involved and the failure of Fifa to amend its rules so as to allow 16-year-olds continue making the trek to British clubs is one way in which football here is going to be disadvantaged. There are those who see it all as a huge opportunity and somewhere down the line they might be right, but in the absence of serious preparation and investment in anticipation of this moment, they can sometimes sound as deluded as those English nationalists.

One of the small positives from the FAI’s point of view is that they have someone rooted in the Irish game running the senior side at the moment. It’s not the headline-grabbing part of the gig but as the association faces up to the prospect of tooling clubs up to play a much bigger part in the task of producing players, it feels like a good thing that there is someone who so completely appreciates the connection.

John Delaney might even deserve some credit for the foresight involved if he hadn’t been so obviously using such an awful lot of the association’s money to play every available political angle a couple of years back when the Mick McCarthy/Kenny succession plan was hatched. Robbie Keane should be in there too but I’m not sure where to put him.

That McCarthy ended up getting more than €3 million for overseeing 10 games is absurd, although it is pretty much in line with the way the association had been paying managers over the past decade or so. Between 2011 and 2020, the various senior management teams were paid somewhere north of €18 million in total with about €7.5 million stumped up by Denis O’Brien and the association coming up with the rest.

It was madness and while it was partly the price of generally recruiting from England’s massively overpriced talent pool, it was also down to the fact that the FAI, because of Delaney’s need to be seen to be delivering, came to be regarded as a soft touch in negotiations. Recruiting Giovanni Trapattoni on an initial €1.8 million was bad enough but effectively doubling Martin O’Neill’s €1 million salary for the period after Euro2016 was an incredibly bad bit of business.

The association made a €4.5 million profit on that tournament, then gave more than the money back to O’Neill, Roy Keane and, to a lesser extent, the rest of the coaching staff, in the form of a pay rise to oversee a World Cup campaign the team was never likely to be successful in.

McCarthy’s take for his 18-month second stint in charge, meanwhile, would have exceeded the amount of money his employers were paid by the primary sponsors, Three, during that period.

Gareth Southgate, by comparison, gets roughly one sixth of what BT give the English FA and while Ireland managers and their various assistants have been receiving something in the ballpark of five per cent of the FAI’s turnover in salary, the equivalent figure in England is less than a fifth of that.

You can argue that the numbers are skewed by O’Brien’s total contribution of almost €10 million from 2008 but perhaps Delaney could have persuaded the billionaire to secure a more lasting legacy for himself by putting the money into building the academies that are so desperately needed here.

None of which is, in any case, a good enough reason in and of itself to have given Stephen Kenny the job – there were other good reasons for that. When the news was announced, though, one poll found that less than 20 per cent felt the appointment was a good idea, a number that suggested he would have work to do to persuade those who didn’t especially rate his work within the League of Ireland.

The reaction this past week to the departure of two prominent coaches from his set-up suggests that that remains a work in progress, although it could hardly be any other way after an autumn campaign so disrupted by coronavirus that it felt at times like a long, drawn out car crash. Then there was Wembley, a fixture that seemed ill-advised even before Ireland lost so badly and Kenny’s attempt to motivate his players gave rise to such an overblown reaction.

The departures of both Damien Duff and Alan Kelly seem to be rooted in that evening in one way or another, although the explanations offered don’t at all seem like the full stories in either instance. It would be interesting to hear more from them than a few mutually agreed paragraphs of quotes in an FAI statement.

Perhaps the only consolation is that Kelly’s decision to go now allows Kenny to try to draw a line over what has been a very difficult start to his tenure. Four days after the Duff announcement did not seem great but it is surely better than, say, March, on the eve of the World Cup campaign.

To judge by some of the reaction, it seems to have prompted some schadenfreude too with slightly gleeful, it seemed, suggestions that the whole situation is descending into farce.

The FAI’s hierarchy is believed to remain supportive, though, with senior figures expressing an amount of certain sympathy for all that Kenny has had to put up with and a willingness to take some of the team’s changed tactics and better moments in the eight games played so far as offering some promise of an improvement to come.

There is no dressing up the stark statistic of one goal scored in eight games and Kenny cannot be under any illusions about the need for the team to make a good start in the spring. Qualification for the World Cup again seems a very long shot but a strong showing is essential from his point of view.

On a reported €540,000 per year, he would be a good deal less expensive to get rid of than his predecessors if he fails but what then . . . back to England and treble the money? Clearly, many people are still sceptical about his ability to turn things around but everyone should be rooting for him. Irish football badly needs Kenny to be a success story in 2021.