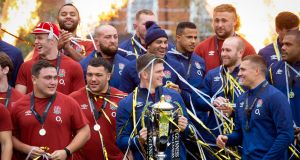 The Six Nations Championship will go ahead as scheduled while the Women’s and Under 20 tournaments will take place later in the year.

“Following the successful completion of the 2020 Guinness Six Nations and Autumn Nations Cup, Six Nations Rugby is in constant dialogue with each of its governmental authorities and is further reinforcing its Covid-19 protocols.” Ireland’s first match is against Wales at the Principality stadium on February 7th.

The was some conjecture that the tournament might be moved to a later date in the calendar or even not played, a supposition given legs following a recent decision taken by the French government to support several Top 14 clubs who did not want to complete the pool stages of the Heineken Champions Cup and Challenge Cup competitions due to spiralling Covid-19 infection rates in Britain and Ireland.

ERC Rugby cancelled the final two rounds of fixtures and is looking to agree a format to complete the tournament.

When France’s sports minister Roxana Maracineanu publicly sought assurances on player safety – Fabien Galthie’s side travel to Rome, Dublin and London during the upcoming Six Nations – before agreeing to support the French team’s participation in the tournament, there was a suggestion that the competition might be in jeopardy.

The IRFU and the English RFU demonstrated during rescheduled Six Nations games and the Autumn Nations Cup matches that they can maintain a largely bio secure environment around the respective national teams. While acknowledging the recent massive spike in coronavirus infections, both unions are confident that they will be able to ensure a safe bubble to protect those involved on and off the pitch.

The Women’s Six Nations Championship will be more problematic to rearrange because the majority of players have jobs. England is the only fully professional team in the tournament. SNRL is aware that the majority players would have to quarantine for 14 days when returning from an away fixture and that’s simply not feasible for those in full-time employment.

What further compounds matters in coming up with dates is the requirement for tripartite discussions involving World Rugby, Rugby Europe and Six Nations Rugby because of the need to also reschedule matches in the European qualifier for the 2021 Women’s Rugby World Cup in New Zealand (September). They have been postponed on several occasions, dating back to last summer.

As things stand there is an ongoing discussion on whether the World Cup qualifiers should take place before or after the Women’s Six Nations. Spain still have a couple of matches to play in determining whether they or Russia will join Ireland, Scotland and Italy in the World Cup qualification process where the winner goes to New Zealand, while the second-placed team gets a shot in a repechage event.

Whatever tournament comes first there are ancillary health and safety considerations outside the pandemic. There has been no women’s club rugby in Ireland since early last year and therefore to resume contact with a view to playing matches, including potentially a warm-up game, would require at least a month’s full contact training.

SNRL did stress that “we will be factoring World Cup qualifiers as part of the mix and the need for proper aligned preparations for unions that have already qualified.” The IRFU director of women’s and sevens rugby, Anthony Eddy, said: “This is disappointing news that we fully accept is in the best interests of everyone involved.

“Our training programme is reviewed on an ongoing basis to adapt to ever changing circumstances and our players have demonstrated a commendable attitude and resilience in this regard while adhering to strict safety protocols. We will also continue to work with World Rugby to ensure our Rugby World Cup 2021 qualification games can take place in a timely and safe manner.”

The Under-20 Six Nations is likely to take place in the summer as there will be no World Junior Championship this year. It’s an important benchmarking tournament from an Irish perspective in terms of an elite player development pathway and in securing contracts for players, whether in academies or not.

The IRFU officially confirmed that Kieran Campbell will take over as head coach to the Irish under-20s for 2021. The 41-year-old was an assistant coach to Noel McNamara for three seasons during which the squad won a Six Nations Grand Slam and were unbeaten following three matches in last year’s curtailed event.

Colm Tucker will stay on as forwards coach while former Ireland international Denis Leamy (defence) joins the backroom team. Campbell said: “We’ve been fortunate to have delivered one camp before Christmas. We were able to build a foundation of work through that camp and through remote video calls with the players in recent weeks.

“With this body of work completed and our commitment to exposing players to competitive game time within the current restrictions, including the ‘A’ fixture between Ulster and Leinster this Friday, players, coaches and management will be striving to ensure the group is prepared to perform for the 2021 Championship at a later date.”