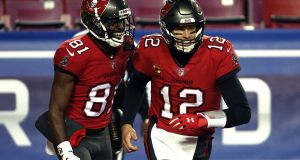 After calling Chelsie Kyriss, the mother of three of his children, a “baster” (street slang for a woman who uses the contents of a used condom to get pregnant) and telling the police in his driveway they were “bitch ass n****rs” and “crackers”, Antonio Brown produced a package of candy penises. Throwing them at the cops, he declared gleefully, “bag of d***s for the d***s.”

His then ex-girlfriend had arrived at his Florida home that morning to bring the kids to school and, he alleged, she tried to take his beloved Bentley to do so. As Kyriss stood on the other side of the street by a squad car with two of his boys alongside her, watching the whole debacle unfold, Brown shouted that she was a “broke ass whore” and “f**king trash” who should be taken to jail.

Midway through one more profanity-laced tirade, when he was deriding the police as “p****es” and “bitch-asses” and warning them to leave his property, the smaller child stepped into the street and said, “I love you Daddy”. Without breaking stride, Brown responded, “I love you papi.” Then, he returned immediately to taunting one cop for being short, describing another as a “broke-ass motherf****a”, and telling Kyriss, now carrying the same little guy in her arms, she was “a bum-ass ho”.

Exactly one year after posting a video of that standoff on his own Instagram, Brown will play for the Tampa Bay Buccaneers in their play-off against the New Orleans Saints next Sunday. Four weekends in a row, the 32-year-old has caught touchdowns from 43-year-old Tom Brady as the terminally unfashionable Bucs suddenly stand two wins from the Super Bowl. If the physical gifts that made Brown arguably the best wide receiver of his generation and earned him more than $70m appear more or less intact, there also seems a legitimate case against him being anywhere near the field at all.

Last October, Tampa signed Brown after he finished an eight-game suspension for violating the NFL’s personal conduct policy. Aside from the self-incriminating film cited above, his transgressions included two allegations of sexual assault. One of those was made by Britney Taylor, his former personal trainer. She has filed a civil lawsuit accusing him of rape and other offences, including walking up behind her and ejaculating on her back as she watched a religious service on her iPad. Amid rumours of an out of court settlement, that case is not due to reach court until next December.

The sordid details of the Taylor allegations were outlined in an exhaustive Sports Illustrated deep-dive into Brown’s troubled life back in September, 2019, published shortly after he’d been released by the then Oakland Raiders (where he threatened to punch out the general manager) and played one game for the New England Patriots. The article was a profile of somebody spiralling out of control, amassing a mountain of unpaid debts for services rendered by trainers, chefs, nutritionists and painters, and even ripping off a children’s charity.

More disturbing than one more athlete with an exaggerated entitlement complex were his multiple run-ins with the police. During his time at the Pittsburgh Steelers (when he was at the peak of his powers), it emerged cops were at his house three times in four years dealing with domestic disputes between himself and Kyriss. In another incident, Wiltrice Jackson, mother of another of his five children, cut her arm after being pushed by Brown in an argument over money. Like Kyriss, she refused to press charges in the aftermath of the fracas.

A mantra in keeping with his rehabilitated image as a good citizen. At least that’s the narrative he and the Buccaneers are peddling. Brady was so desperate to add him to the roster back in October that he invited him to move into his house when he signed a one-year deal worth $1.66m, the precipitous drop in pay reflecting how few clubs were willing to take a chance on him.

In the waning moments of their last regular season game, a 44-27 victory over the Atlanta Falcons, the quarterback flung him three charitable shovel passes in a row so he could reach 45 catches for the season and earn a $250,000 bonus. He also set him up for sessions with Tony Robbins, the toothy lifestyle guru who has himself battled allegations of groping women and misogyny.

Sounds like the type of changed man who is now engaged to Kyriss. Or somebody adhering to a script that has garnered him his umpteenth chance in a league where Colin Kaepernick was frozen out forever for protesting during the national anthem. As long as a team has a specific need, it seems those with rare talents will always get work, regardless of their questionable character and disgusting behaviour.

Because, to paraphrase Brown in his video, it’s the NFL. Not real life.