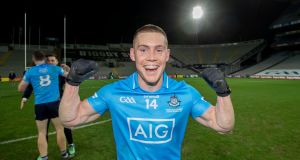 Con O’Callaghan puts this down to the basic yet often neglected principle of managing people with decency.

“I had Dessie for two years at under-21s and I can safely speak for probably everyone who played under him – he fostered a relationship with a lot of lads where there was compassion and care.

“Real care for the players. He has pretty deep relations with a lot of the players that he managed from a very young age.”

Farrell has quietly guided the likes of Brian Fenton and Ciarán Kilkenny through the grades since under-14s.

“I know lads were definitely motivated, not to play for Dessie, but there was definitely that sense of care that they wanted to give back to him considering how much he has given to Dublin football underage and at different levels.

“He lets you know that you are appreciated, even if it is a call the day before the game, saying what you mean to the group and what you mean to him even. He is very good at connecting with people on that level. Like, I have a really close connection with himself and Mick Galvin, who is the forwards coach.

“It probably does show itself on the pitch in those tight moments. Lads are really willing to go to the well for each other and the management. It creates that type of environment.”

These days O’Callaghan is all grown up and working for Pricewaterhouse Coopers. His first proper job has nothing to do with being named the PwC sponsored footballer of the month for December. No, that accolade is down to what the 24-year-old does every time he treads the Croke Park grass.

Last month’s victory over Mayo secured his seventh All-Ireland medal – five for Dublin and two in hurling for Dalkey club Cuala – with his man-of-the-match prize all the more sensational considering the man-marking job done by Oisín Mullin.

Mayo led by two points in the 23rd minute when O’Callaghan leaned into a low percentage left foot shot only to dummy and step past Mullin before crushing Mayo hopes by punching Dublin’s iconic second goal.

“I probably had a slow enough start in the game,” he admitted. “Oisín Mullin picked me up and he got a few kick-outs early on, and I was probably a bit shaken. Well, not shaken, but probably saying ‘Jesus, I’m not getting on enough ball here, not much is happening’. I had a shot on goal that I probably could have taken an easy point for, probably tried to force it.

“I suppose you just have to kind of ride that wave . . . and when you do get a purple patch or an opportunity really go for it and take it, because you might not get that many.”

That Mayo team, and this rivalry, will never be the same following the retirements of David Clarke, Séamus O’Shea, Tom Parsons and Donal Vaughan. O’Callaghan accepts how “lucky” he is before mentioning a recent conversation with Richie Hogan.

“He had something like seven All-Irelands by the age of 27 and he said he hasn’t seen one since. So, it’s funny how things can really dry up. I am definitely very aware that I have been blessed with the times I have had with Dublin and with the club as well. They have been really successful. I am very aware that we have had a great run of things. Now, it’s not going to last forever, hopefully it will, but obviously it won’t.”