Sonia O’Sullivan: No secret recipe to the best energy drinks 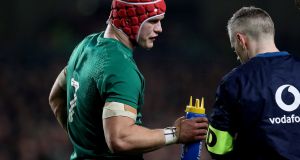 Like most people there I was, early Sunday morning Melbourne time, trying to keep up with the Irish rugby team, impossible to find the time to even make a cup of coffee, such was the relentless pace of their hard-earned victory over New Zealand.

Clearly the players were putting extra emphasis on staying hydrated during the game – and it also got me wondering how they would go about recovering from an effort like that.

When training and preparing for any endurance event, there’s an ever increasing awareness among all levels of competitors that nutrition and fuelling is as much a part of the preparation as the training required.

The training is probably the easy part to get your head around, as it’s been tried and tested so many times; the nutrition side of things is changing all the time and everyone wants to know the latest best method of fuelling. Energy drinks, energy gels, energy bars, energy balls – there’s so much choice it’s hard to know where to start and what you actually need.

Sometimes I try to remember when I first started to carry a water bottle around with me; definitely not in school, or even in college in America. I can only recall having a drink of water before heading out for a run, then again on my return.

I do remember drinking fountains in every building while at Villanova, so you might stop for a mouthful of water between classes, or when racing across campus to get to the Jake Nevin Field House to be on time for one o’clock training.

The closest thing at home would have been the large cast-iron water pumps you still see on the side of some country roads. I don’t know do any of them work anymore, but I have definitely known a few to splutter out some water while out on some youthful adventures in the 1980s.

Even by the time of the 1992 Olympics in Barcelona it was still just plain drinking water, maybe with a taste of diluted orange cordial that I had packed in my bag from home.

If you got the chance to watch any of the big city marathons in recent weeks you would have noticed the runners at the front of the field picking up their own personal drink bottles along the way, varying the dilution depending on the weather and what stage of the race they plan to pick up the bottle.

Then there’s the decision of what to actually put in the bottle. With so many options out on the market, it’s hard to look beyond what the fastest runners in the world are using.

There is one drink world-record holder, London and Berlin winner Eliud Kipchoge, Chicago winner Mo Farah, New York winner Mary Keitany, amongst many others, have in common; they all choose the new Swedish drink formula called Maurten as their fuel of choice in training and during the marathon.

This is a science-driven drink; no additives, colours, flavours or preservatives. It’s got a sweet but bland taste, not something you would drink outside of craving for the nutrients during an endurance event.

I’ve tried it myself on a low level, with no real evidence of its fuelling properties. For me it’s all about the taste and the ingredients, to try to work out what makes this one drink so special. Just five ingredients, components of sugar and salt and a pectin that gels the drink together when mixed with water to create a hydro-gel, which makes it so much more absorbable and tolerable on the stomach when running at a fast pace. Not exactly a secret recipe.

It comes in a conveniently measured sachet, ready to be mixed with 500ml of water. It’s important to get the ratio of water and drink mix exactly right. You can go with drink mix 160 or 320; that’s the number of calories per sachet, depending on the energy required to match the energy expenditure. It works out about €2.60 per drink, so no more than a cup of coffee.

When I took on a big cycle last year the advice I was given was either all natural foods or processed gels and drinks; don’t mix them.

The convenience of the Maurten sachets works well but I also like to try and be a bit creative in the kitchen with ingredients you might already have. Similarly, I’ve always preferred real food to any vitamin supplements.

So I often find myself making my own energy drink; 500ml water, juice of a lemon, teaspoon of salt and maple syrup to balance out the salt and acidity. No secret recipe there either. Sometimes you have to look beyond the packet and with just a few simple ingredients naturally fuel yourself.

1 Seán O’Brien: Anger over my parents’ break-up never left me
2 Madness or defiance? The GAA is taking a huge gamble in staging Championships
3 Sportsman to statesman, Marcus Rashford is a ray of light in the darkness
4 Plenty of positives for Farrell as Ireland hit the ground running
5 All in the Game: Klopp’s Amsterdam subs don’t go down well
Real news has value SUBSCRIBE
Here is your handy guide to sport on television this week