Juliet Short set to fulfil her dream of playing for Ireland 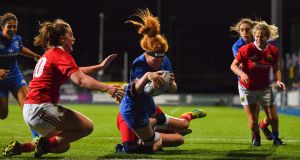 Juliet Short in action for Leinster: the player has been included in the Ireland team for the November Test matches. Photograph: Brendan Moran/Sportsfile

Just a few years ago Juliet Short was told she would never play rugby again when a spine injury threatened her career. She moved to Brazil to coach but as she healed the green jersey kept calling, and against the odds she togs out for Ireland later this month.

One of nine new faces on the team for the November Test matches, Short comes with a lot of experience for a new cap. Fresh from winning the Interprovincials with Leinster where she scored four tries, she’s previously played with the Ireland Sevens and England Under-20s and clubs including Railway, Newcastle and the Exiles.

But when asked how she feels about the autumn internationals, she simply says butterflies.

“I’m really excited about this, I have butterflies. It makes my heart pump just thinking about it. It’s all I’ve ever dreamt about, to represent my country – that’s been the dream,” she says.

Growing up in England, rugby was a huge part of her life. Her father is from Stradbally in Co Laois, and she jokes that she’s English but with an Irish heart. And the flaming red hair to prove it.

As her father was president of their local club, and her brother Christian played – also crossing to Ireland to play with Connacht – she was never going to take any other sport seriously.

She says: “I played for the Under-20s for England for four years. And no, no I wasn’t the captain. Someone somewhere wrote that, and it’s on the internet now. I loved it, but it wasn’t a hard decision to play for Ireland. I still see the girls, you never lose those friendships.”

She came to the attention of Irish selectors after a call-up to the Exiles. Making it to the final cut for the World Cup team in 2014, she seemed set for a glittering career.

But she explains: “Before the World Cup I got diagnosed with a cervical disc bulge, they were like you can’t play again. They said that. I’ve been plagued with injuries.”

Turning away from it all, she took a coaching job in Brazil on a programme run by Try Rugby SESI , Premiership Rugby and the British Council. A much-needed confidence boost as she remembers being the only woman interviewed; a chance to show Brazilian girls rugby can be for them too.

But she couldn’t stop thinking about that green shirt. She played Sevens in Brazil but didn’t train seriously and now says that enforced rest probably extended her career.

When the Ireland Sevens team under Anthony Eddy played in Brazil, she had a chat, which led to a chat with Tom Tierney back in Ireland. He bluntly told her if she wanted opportunities, she had to return home. So it was goodbye sunshine and hello training in the rain again.

She spent a year on the Sevens team, focused only on rugby but doesn’t seem to miss it or resent that the men’s teams have that as a norm.

“I had insight into that lifestyle with the Sevens which was great. It was different, you’ve got to be 100 per cent dedicated and committed. Unless you’ve experienced it, it’s hard to understand. The men’s teams have a great opportunity, but I would say a lot of people don’t understand or see the difficulties that professional sports people go through.

“It’s pure sweat, tears and blood that you give and commit to it every day as a job, as work. You put your body through such extremes.”

Plans for the Sevens team dominate the IRFU’s Women in Rugby Action Plan 2018–2023 launched in October. The overall aim of the plan is to increase participation of girls and women to 20 per cent using Sevens as the lure now that it’s an Olympic sport.

Chair of the committee Mary Quinn says: “In schools we are committed to creating opportunities for female students to experience rugby through an XRugby7s and Sevens pathway. This, in turn, will support an increased flow of talent through the Women’s All-Ireland League and provincial panels into national squads.”

Short says for the players there is no division between the teams. She describes how the Irish 15s were in training camp recently when the Sevens team were at the HSBC World Rugby Women’s Sevens Series. Their only thought was to make a supportive video and share it on WhatsApp to Colorado.

“Social media and things like WhatsApp have been huge for women’s rugby. You would have been so far away before, you wouldn’t know what’s happening but now it’s all there,” she says.

Now in her second year back, Short says things couldn’t be going better. Playing a key role for Leinster claiming the Interprovincials in September, she sees all her experience now feeding into her game.

She says: “I definitely feel I’m such a better player now from having the experience in the Sevens, the season with Leinster was amazing. I’ve never had a such an electric season, electric Interpros.

“I think that’s down to the players believing in each other, and to believing in the system and the process. It’s very powerful. The support level we got from Leinster this year, you could definitely see it. You’ve people like Larissa Muldoon working with us, it’s huge.”

Like everyone on the Irish team, Short balances work and training; in her case as one of Leinster’s community development officers. She is dismissive of the idea her schedule is stressful, pointing to other players juggling training and full-time work with children added to the mix.

Working in the northwest in a role co-funded by Leinster and Dublin City Council, she says it’s an opportunity to bring new faces into rugby. The kids she meets in schools around Ballymun and northern regions love GAA or soccer and she notes in a wry understatement that it’s a non-traditional rugby area.

“Dublin City University is in that part of the city, it’s an opportunity on their doorstep. There are rugby scholarships available, and it’s part of my job to let them know about that. It’s a new sport here, we are building on the work done by clubs like Ravens and Coolmine. It’s working from the ground up, without the youth you won’t have seniors,” she says.

And not just the youth, as Short ran a course for elderly people during the recent SportFest. Apparently once they got over the shock of it, great fun was had with modified exercises – leaving bingo in the shade.

But now it’s the reality of counting down to America at home and then England in Twickenham. Short is not fazed by the challenges ahead, just enjoying it all.

She says: “This is all really exciting. I feel like the organisations have got our back, and I think next year is going to be even better. Bring it on.”