Joanne O'Riordan: Bring women’s FAI Cup out of the Aviva 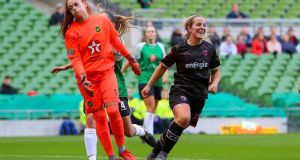 There is something sensational about cup final day in Ireland. It truly is a magnificent time of the year where the cream of Irish soccer rises to the top, and the best can be determined from who can hoof the ball the most . . . I mean who can play the best soccer.

But in all seriousness, the cup finals usually have the two best teams going toe-to-toe year in, year out. This year was no different as Peamount United faced Wexford Youths. Rianna Jarrett versus Amber Barrett, Áine O’Gorman versus Kylie Murphy. The thing with Youths and Peas is that they play each other so much (three times in the league, again in the League Cup final) that they know each other relatively well at this stage.

I suppose the beauty of women’s soccer is the fact that it’s really everyday women who are becoming heroes, and their stories are normally on show in the build up. Whereas the men’s game has sort of turned into a funny rivalry between Cork City and Dundalk (plenty of abuse flying over the last few years), the women’s game is a bit more unpredictable.

Yes, you can guarantee Wexford will be there somewhere, but a team like Peamount, filled with stars, have not played in the Aviva or have been in an FAI Cup final for six years. And the players are always full of character.

Firstly, you’ve Donegal’s Barrett, who, in the space of 18 months became an Irish international, scored a crucial goal in the World Cup qualifier against Slovakia, was nominated for Women’s National League Player of the Year and earned all of this while undertaking her teaching master’s in DCU and teaching in an all-boys school in Finglas.

Constantly in games we have seen a determined but down to earth up and coming superstar for Ireland. Watching her on Sunday, you did have an inkling that she could be one of those dominant genius strikers, a bit like a Suarez. She’s always making noise, hassling defenders, making runs and you can literally see the determination and desire to win . . . even if it means diving for a penalty, but, that’s the nature of the game.

On the same team, you had O’Gorman who is an incredibly original number 10 and, in my opinion, was a tad bit wasted on the left. O’Gorman works best when she’s playing off the striker and driving at defenders. With over a century of Irish caps to her name, and her international career unfortunately shelved, the only time we will get to see this creative dynamo is at club level.

For Wexford Youths, you have crossover and heroine for the day, Katrina Parrock, who was a star at camogie before making the jump into soccer. Sure, her goal was what separated the teams on the day, but, it really was the Peas’ lack of creativity in the final third that killed them. We know the talent is there, but in the off-season, maybe the Peas can look towards finding another creative partner for O’Gorman.

Unfortunately, though, the two main talking points of the day were the referee calls. I can’t deny that I was incredibly hyped seeing Peter Collins getting unnecessarily giddier and giddier over analysing the penalty incidents – and the few thousand who turned up to watch the women’s final. Was it a case of very little advertising, was it the early kick-off or was it because neither team had a male counterpart playing in the other final?

I’m sure we could all be here forever analysing it, but Ruth Fahy was right on RTÉ when she spoke about possibly bringing the games to smaller venues. A part of me is torn, however, as I want these women to play in the national stadium and on the grandest stage of them all. But, then, I thought about an article I read recently on Spain’s national team.

The idea of soccer, especially national team soccer, is that it is supposed to belong to the supporters and is supposed to be accessible to every fan. The FAI and clubs have done a great job in making reports, team sheets and other information available to the supporters, so maybe we should look at establishing a core fanbase for the women’s teams. Perhaps the Irish girls can play in various stadiums across the country, from Turner’s Cross to Dalymount and so on.

Once the attention is gained at international level, then you could look towards using the core base in developing the games and making them bigger and better. I understand everyone wants to play at the biggest and best stadiums, but a part of me does wonder if it is disheartening to play among a relatively quiet stadium at times.

Just like Rome, the structures and growth cannot be built in a day; these things generally do take time. But for me, it is time to get back to the basics and maybe, just maybe, look at how women’s soccer can become a sport that is ours, something that we can all enjoy, and all have a say in.