From Googling ‘Gaelic football’ to an All-Ireland semi-final

Anna-Viktoria Vittinghoff finds a home from home in Scotland, and a love of Gaelic football 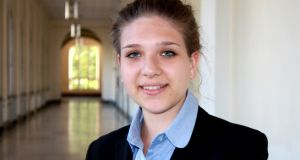 Anna-Viktoria Vittinghoff: “All my team-mates are living away from home, and I’ve been away from home for several years now too. You find home on the pitch”

When you ask Anna-Viktoria Vittinghoff how she would have reacted if she had been told 18 months ago that she would be playing in an All-Ireland club semi-final in Aghabog, Co Monaghan, in November 2018, she laughs loudly.

“I would have been absolutely perplexed. First thing I would have had to do was Google Gaelic football.”

The sport, then, was a stranger to her until last year, and her only “connection” to Ireland when she was growing up in Germany and Hungary, the respective birthplaces of her father and mother, was a fondness for folk music and the American Celtic punk band Dropkick Murphys. A tenuous enough link, that.

But here she is, taking a break from her work on a PhD in Japanese studies at the University of Edinburgh to prepare with her Dunedin Connollys team-mates in Scotland for that intermediate semi-final against hosts Emmet Og on Saturday. Vittinghoff has some explaining to do.

It was, as it turns out, all down to the two Irish students with whom she shared university accommodation when she was doing her masters in east Asian relations in Edinburgh, the pair telling her last spring that Dunedin were looking for new recruits and inviting her along.

She had been sporty in her youth, karate and soccer her passions. The 25-year-old shared her father’s devotion to their local second division club in Bavaria, SpVgg Greuther Fürth. “And their badge is a shamrock – so there’s a connection.”

Strange as it was to her at first, she loved Gaelic football from the off.

“I found it combined a lot of things I’d already known, elements from soccer and from the handball we play in Germany, how you use space, the running, the dynamics of it.

“Obviously I still have to learn a lot, for example soloing which wouldn’t come naturally to me. For the other girls it’s a very fluent motion, almost like dribbling in basketball. But I feel more confident now in my ball-handling, I just need more practice and experience.

“There is a lot of competition for places, but if I can help the team coming on from the bench then I’m happy. This season I was mostly a corner forward – I’m six foot tall, so height is the main thing I can contribute.”

Vittinghoff has found an unlikely family in Scotland among a panel of players that is made up of exiles from 15 Irish counties as well as four Edinburgh-born schoolgirls.

“We are kind of in the same boat. All my team-mates are living away from home and I’ve been away from home for several years now too. You find home on the pitch. The girls are so supportive, not only teaching me everything and being very patient with me, but also off the pitch it’s such a nice support network to have, the feeling of togetherness.

“It’s been something that has really enriched my time in Edinburgh. At the beginning the girls were always talking about the football family, I can absolutely see it now, and I experience it almost every day.”

The women’s side of the club was formed 20 years ago, their finest hour reaching the 2013 All-Ireland junior final where they lost to Na Gaeil. Yet this year they beat the Tralee club in the quarter-finals of the intermediate championship, for which Dunedin qualified by winning the British title.

Managed by former Waterford footballer Niall Considine, the GAA’s development officer in Scotland, and Leitrim’s Ferghal McMorrow, the panel is sprinkled with players who represented their counties before study or work took them to Scotland.

Captain Karen Feeney won the 2010 All-Ireland intermediate title with Donegal, Caoilfhionn Deeney was on the 2011 Wicklow team that won the junior All-Ireland, while Rosanna Heeney reached two junior finals with Louth. Miriam Crowley was an international hockey player before moving to Edinburgh, where she is a dentist.

With six physiotherapists, two nurses and a surgical care practitioner on the panel, the players are not short of medical care, and if they are ever in need of a translator, Vittinghoff could prove useful – she speaks German, Hungarian, English, French, Japanese, Chinese and Latin. Her father Helmolt was a lecturer in classical Chinese, so she came by her linguistic flair honestly.

Are you picking up any Irish? “Bits and pieces,” she says. “What’s the craic?”

She has had some craic with the club since she joined, her travels with the team taking her all over Britain.

“We have our Scottish league, which is kind of the warm-up to the northern division of the All Britain, then we have to travel. This season we went to Manchester, Liverpool and Glasgow, we played in York for the semi-final and final, so I’ve got to see parts of Britain that I would probably never have seen.

“We have to do a lot of fundraising for our travels, like this trip to Ireland. We have help from our sponsors in Edinburgh, but often we have to contribute a fair amount ourselves.

“But it’s an amazing club. The youth work that has been going on in the background is really fantastic, it reminds me a lot of the development work that goes on in soccer at home. There are around 25, 26 players who come to training regularly, and there’s a similar number playing with the underage team.”

Vittinghoff’s only previous trip to Ireland was around eight years ago when she visited Dublin on a school trip. She is hoping this visit to Aghabog proves as enjoyable.“Reaching the final would be a very unexpected but beautiful surprise.”

Which sums up her experience with Dunedin Connollys and Gaelic football thus far.

Resurrection beckons for Jamie Donaldson in Cyprus 16:39
Scotland end 18-year Welsh curse to finish on a high 16:31
Home comforts for Walker as he seals win for Man City 14:52
Valtteri Bottas pips Lewis Hamilton to pole position in Italy 14:47
New Zealand blow Australia away with record victory 13:22
Crossword Get access to over 6,000 interactive crosswords