Sonia O’Sullivan: The lure of the annual marathon 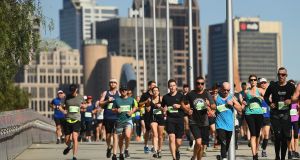 We’ve all read one of those novels where everything seems to be building towards the last few pages, some dramatic conclusion already playing around in your head, and then, suddenly, it all ends very differently.

By the time you count those few blank pages and snap shut the cover you just know you’ve got to read the book again. Only this time round to read it better.

Something similar happens when you finish your first marathon. For some the initial thought is “never again!”, only by the time the finisher’s medal is around the neck the thoughts are already starting to filter in...what about the next one? How can I do it better?

When the preparation and training becomes such a normal part of your life it can be hard to let go. Some people are happy to just tick the box – marathon complete – but for most others that first marathon is only the start of a new and lasting adventure.

I got a reminder of that this week when invited to meet and talk to the Melbourne Marathon Spartans Club. This is no ordinary running club. In order to join you must first run nine Melbourne marathons, then sign up and be presented with your green Spartan singlet to wear as you line up for your 10th Melbourne marathon. It doesn’t stop there either.

Once you complete your 10th marathon you’re allocated your Spartan Melbourne marathon number for life. Every time you sign up for the Melbourne marathon after that you’re issued with the same number to wear. It may sound a little extreme but membership is fast increasing.

The Melbourne marathon is one of the longest running big city marathons, first staged in 1978, a few years before the inaugural Dublin marathon in 1980. In 1987 Melbourne Marathon Spartans Club were founded, when it became apparent that over 80 runners were about to embark on their 10th Melbourne marathon. The idea was to acknowledge and mark this significant achievement, not realising this would also encourage more runners to view this exclusive club as a challenge they could aspire to.

Now 41 years later, and there are six runners who have completed every Melbourne marathon. These are known as the Spartan Melbourne Marathon Legends, each with a different story to tell for every marathon completed.

Once inducted into the club the marathon running doesn’t stop, with runners’ achievements acknowledged every five years with a change of singlet colour: it’s blue after 15 marathons, red after 20, black after 25, then once you achieve 30 and legendary status, you get to wear the green singlet with white inserts.

Only the runners who have completed all Melbourne marathons get to run in the distinctive green and gold singlet, letting any runners running behind you or cheering from the sidelines know you’ve completed them all since 1978.

There are currently over 1,300 Melbourne Marathon Spartans Club members. Once you discover this club it becomes more intriguing as every time a member crosses the marathon finish line they’re already looking ahead to the next year, further adding to their marathon tally.

What seems like something out of the ordinary can quickly become a normal part of what you do. This is one club where once signed up you are committed for life: as long as you can complete the marathon in less than seven hours it counts as one more ticked off. Bragging rights aside, it does get physically harder each year, but mentally you become stronger, knowing with each passing year what the body can deliver once the mind is made up.

I remember when I was forced out of the Cork marathon through injury just a few days before the race in 2011. I’d planned to run for Cork University Hospital’s children’s unit, and had done all the training. At the last minute I decided to take part anyway, only walking the entire way. Walking a marathon is something I’d never have thought about doing before, and in ways it turned out to be an even more rewarding challenge than running.

Five hours of walking actually seemed more normal for me than standing waiting at the finish line to cheer the others home. At the time a friend of mine had queried the decision: wouldn’t this bring down my average marathon time considerably? But marathon running isn’t all about that.

Back in my competitive days training and racing also seemed so normal at the time. Twice a day running, every day, except Sunday, when it was just one run, only twice as far.

Looking back now I often find myself thinking “now did I ever do that?” Running so much and so fast, and surviving the intense training to then race week after week, sometimes over 20 races in one season. Still, it all just felt so normal to me I never saw it any other way.

In some ways the Melbourne Marathon Spartans Club is no different. It all seems so normal. It’s just what these people do – get to the start line every October, and once at the start line getting to the finish is never in doubt.

We often look up to other people and feel inspired, particularly sports people who find themselves in the spotlight. To inspire or to be inspired to test the limits and have others admire in some way.

When you it break down it’s often just normal people doing normal things, sometimes at an extreme level, standing out from the ordinary, and creating a sense of mystery that we all want to know more about.

It’s something the Melbourne Marathon Spartans Club is also encouraging, to hold on to that extraordinary “normal” feeling for as long as you can, and stand out among the crowd of runners on Marathon Sunday.

It’s not just the winners and record holders that provide for wonder and awe, but also those that keep turning up year after year to add one more marathon finish time beside their name.

1 Diego Maradona dies of heart attack, aged 60
2 Keith Duggan: Through the glories and the disgraces, we were all Maradona addicts
3 Darragh Ó Sé: Cork and Donegal went out with the wrong attitude
4 Gordon D'Arcy: I know what Joe and Cheika would do. Fix the basics
5 Andy Farrell to delve deeper into Irish squad for team to play Georgia
Real news has value SUBSCRIBE
Here is your handy guide to sport on television this week