Sonia O’Sullivan: To reach the top, you need to be an outlier 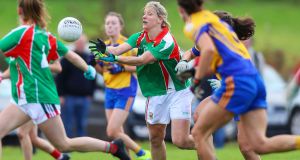 I was sent a copy of a book recently, the just published Blazing a Trail: Irish Women Who Changed the World, written by Sarah Webb, and beautifully illustrated by Lauren O’Neill.

On first appearance you might actually think this is a children’s book, and in some ways it is, bringing to life for all ages stories of Irish women down through the ages – women who left their mark on the world, blazing their own trail, cutting a groove for others to follow in their footsteps.

There are only a few sportswomen among them, but enough to inspire young girls who may want to take that same path, intermingled with women who flew airplanes, jumped out of airplanes – and even one, Margaret Bulkley, who lived her life as a man in order to pursue her career as a surgeon in the British army, and Mary Robinson, the first female president of Ireland.

One of the things that surprised me was when I got to the story of Maeve Kyle, Ireland’s first female Olympic athlete. When I was growing up as a young girl in Cobh I didn’t know this story. Even as an avid reader there was no such inspiring stories to read before bed each night.

The best I can remember is the Ladybird Book of Saints, so there were some inspiring stories of women with fighting spirit, but these seemed more legends and folklore tales that you could not truly relate to.

The other thing that stood out to me was a highlighted quote attributed to me, which I most likely said as a throwaway line, and only reading back it makes so much sense now. “To be a professional athlete, you need to be prepared to be different.”

There is no mention of a female athlete, just purely a professional athlete, which to me also stands out given there is now so much emphasis on women in sport.

Take the recently launched 20X20 initiative in Ireland as just one example. The aim and drive here is to increase participation, coverage, exposure and attendance of women’s sport by 20 per cent by 2020.

At the same time I was making my way through Blazing a Trail, I found myself working my way through Cora Staunton’s new book, Game Changer, and also had a night out at the cinema to see Katie, the movie documentary on the life and career of Katie Taylor.

There has never been a better time for girls and young women to be inspired to take up sport, or pursue their sporting dream to the highest level.

All these examples show what is possible when a girl has that dream, and pursues that dream of a life in sport through hard work and determination.

Yet you can’t just turn up and join in if you want to stand out and be an outlier in your chosen sport. In order to compete with the best, you need to be prepared to be different, you need to go against the grain and find the path that works for you.

Even the most determined athlete will meet many hurdles along the way; come to many dead-end roads, because it’s definitely not a smooth and well-groomed path to the highest echelons of sport.

There is also so much more than the physical ability and training commitment. There is a huge mental component that was never discussed when I was growing up. It just became what I did, and turned me into the person I am today.

I actually found myself recognising quite a few similarities when reading through Cora’s book and watching Katie.

It’s that innate ability to make up your mind and go for it. It doesn’t matter if it’s dark and cold and raining outside, there’s still a path you can run on with lights to lead the way.

I remember one time visiting my grandparents in Robertstown, Co Kildare. It was just after 5pm, so not very late, but in the depths of winter when the light was fading. I knew the road I wanted to run down, but my dad insisted on following along in the car with high beams on to light up the road.

I was just so determined to get out and run. It’s always been the same if there’s training to be done – nothing gets in the way. Even today it’s still an important part of my day, to give me a certain energy and calmness to get through it.

I remember before The Irish Times Women in Sport Awards last year I wanted get my hair blow dried. Not something I grew up with, but it is a nice treat to get away from the frizzy curls for a special occasion.

Looking for the last-minute appointment, I was offered 7:30am; only that would never work, not when I’d have to get a run in first. So the run won out, but I left myself on standby just in case something freed up a few hours later. Then, run done with positive energy and thoughts, a welcome message on my phone: “Come down at 10:30am”.

It’s the price you pay when your mind rules your body, you just can’t change the determination to complete a task that’s fixed in your mind.

It was no different for Cora and Katie, football with the boys, boxing with the lads, it didn’t matter just getting the job done. And back in my own time if there was company with a few boys for a run it was always easier done than on your own.

I do remember sometimes thinking, “I’ll never keep up, they’ll be going too fast”, only it never stopped me joining in and rising to the challenge. Sure if you could keep up with the boys, what girls would stand a chance at the next cross-country race? I never really considered that all the other girls were probably out there running around with the boys also.

Times are constantly changing, and it’s not just the outliers anymore but a mass participation of women in sport. Across the board in all sports the number of women participating is increasing, it’s most obvious when you look at the growing number of women running in local races and marathons. Once the endorphins filter in, no challenge is too great.

The one thing that stays constant and must not get lost in the push for participation is the standout athletes, the ones that need to step outside the box, train a little bit more, push a little bit harder.

They will ultimately find their own trail and not be compromised, because they want to stand out and be better than the rest. To be strong enough mentally is to be that little bit different, and blaze a trail of their own – whether that’s in sport or any other chosen career path.