Sonia O'Sullivan: The healing powers of a walk in the wild side 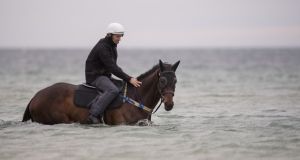 Sea water seems to help a horse’s legs and any cuts they may have, again all very familiar to me. Sea water has always helped to heal cuts in less time

It was front-page news in almost all the Australian newspapers on Monday morning. No, not Conor McGregor, who, not surprisingly, didn’t even get a mention, but the picture of a racehorse going for a recovery walk in the shallow sea at Altona Beach, in the western suburbs of Melbourne.

This was no surprise as the racehorse is called Winx, already a household name in Australia, and currently one of the most famous sporting names in the country.

Winx would be well known in worldwide racing circles, but in Australia there always seems to be one horse who grabs all the attention. For the past four seasons this horse has been Winx, a seven-year-old mare with 28 successive wins, including 21 Group One victories, the most recent of which came at Flemington racecourse last Saturday.

Winx came from behind over the final 200m to win the 2,000m Turnbull Stakes: not that her victory was ever in doubt. Most of the 22,715 crowd came to get an up-close glimpse of their latest champion and wonder horse.

Before Winx came along there was Black Caviar, who was retired in 2013 having gone unbeaten in 25 races, also a massive attraction to the spring carnival races that get going at this time each year. There always seems to be a star horse waiting in the wings to shine bright and attract the crowds each year.

These racehorses take on a fame of their own, spoken about on radio and in every coffee shop, at school and at work, and written about on the front and back pages of every newspaper.

It’s also a sign that spring has definitely arrived in Australia, the AFL season over, and racing season going centre stage.

For me it was the picture of Winx walking in the sea that really stood out: I’ve seen it before as it’s one of the oldest remedies out there to help the muscles of an athlete recover from a hard effort.

We’ve all heard how good sea water is for recovery, and how a walk in the sea can help ease daily wear and tear, and minor aches and pains. Just last week a friend of mine was complaining of a sore knee and mentioned going for a walk in the sea. The next day he was out playing a round of golf, no bother to him.

There is no slowing down Winx. Earlier this month she added to her unbeaten streak claiming a third straight Australian Racehorse of the Year title in a unanimous verdict.

Next up is the Cox Plate at the end of the month, a race which she has won the past three years, and so will be aiming for a fourth straight victory. This race attracts horses from all around the world, and is often used as a run-out before the Melbourne Cup.

The Melbourne Cup may be the race that stops the nation, but Winx is the horse in form that stops people in their tracks just to see if she can rack up one more record victory.

Her trainer, Chris Waller, has also installed an aqua-walker in their stable back in Sydney, which mimics the water recovery method. This is clearly no old wives’ tale.

I also remember doing something similar when in school back in Cobh over 30 years ago. If you rolled your ankle or had a sore leg, a walk in the sea was always recommended, especially when the water is that bit cooler in winter and spring. It served the purpose of an ice bath, and natural sea minerals are soaked up.

It also seems to help a horse’s legs and any cuts they may have, again all very familiar to me. Sea water has always helped to heal any cuts in less time.

Over the years there have been so many different recovery methods for athletes. While running at college in Villanova, US, we had two big silver whirlpools, one ice cold and the other steamy warm, which allowed for what we called contrast baths.

These days you can buy a whole selection of mineral salts and Epsom salts to throw into your bath at home, hot or cold, all trying to replicate the natural remedy of sea water. Then there’s the seaweed baths that by all accounts help heal and invigorate.

More recently you are likely to see athletes sitting on the couch with their legs fully enclosed in inflated recovery boots that compress and deflate in a process known as compression therapy. I can remember when Black Caviar went to race at Ascot in 2013 she was seen boarding the plane in Melbourne wearing what appeared like specially designed-compression tights and a body suit for the journey.

Still, nothing beats a recovery walk or dip in the open water. At the boys’ school in Melbourne where I coach some of the athletes were talking about feeling sore after a race, and my immediate answer was to take a walk in the sea. Especially when the sea is so close by, it would be mad not to use such a natural resource.

It has certainly worked for me down through the years, doesn’t cost anything, and just being in the sea is also a relaxing and invigorating time for the body and mind.

It’s good to be reminded of the simple things in life, and just seeing Winx walking in the water did exactly that. Most of us live very hectic and busy lives, and sometimes there is more to the time-out than we realise. You might be rushing around all day, then decide to take 15 minutes to go for a walk in the sea, and straightaway you realise the extra energy it gives.

Leave the phone in the car, rug up with a big jacket and hat, and walk around the sea in your shorts. It works for me every time.

The benefit to tired and aching muscles is not an exact science, but even if it just gives you a time-out and relaxed mind then it’s more likely that all your other aches and pains will also fade away a little.

It’s not just the local racehorses. I’ve heard plenty of stories of AFL football players jumping into the sea between games ahead of the grand final.

And for years doctors have been recommending patients to spend some time in sea water as part of the recovery no matter what the illness or injury.

It’s not all about the gadgets and the latest inventions, and sometimes it just takes a superstar horse to remind you of the simple things in life.

And how some of the best things in life are free.

1 Diego Maradona dies of heart attack, aged 60
2 Keith Duggan: Through the glories and the disgraces, we were all Maradona addicts
3 Darragh Ó Sé: Cork and Donegal went out with the wrong attitude
4 Gordon D'Arcy: I know what Joe and Cheika would do. Fix the basics
5 Andy Farrell to delve deeper into Irish squad for team to play Georgia
Real news has value SUBSCRIBE
Here is your handy guide to sport on television this week