Siobhan O’Leary well known in boxing, while Cathy McAleer is leaving karate behind 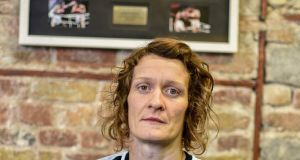 Siobhan O’Leary: “I’ve no worries whatsoever about getting in there without a helmet. I’ve a strong belief in myself”

This month two Irish women join the professional boxing ranks, with their fights taking place in Dublin and Belfast. And even though both Cathy McAleer and Siobhan O’Leary are keeping their day jobs for now, they are optimistic about the state of women’s boxing in Ireland.

O’Leary is already well known to boxing fans as she spent six years on the national amateur team, taking the 60kg national title on her final outing.

She says the pro-ring holds no worries for her. “I can’t wait to get in there, experience a proper pro- fight for the first time. I’ve no worries whatsoever about getting in there without a helmet. I’ve a strong belief in myself. You can’t have any sort of fear getting in there, you have to delete fear.”

Lacking a helmet is not the only difference she has noticed. Amateur boxing is based on speed; athletes dart in to score a point and then retreat before setting up quickly again – although a solid punch will rock anyone, helmet or not.

O’Leary says the training with Eddie Hyland’s Team TNT in Dublin is teaching her a new style, a new way of landing the same punches and opening up the strength she did not rely on as much in the amateur ring.

The Kerry woman says: “The training is different to what we did before. Pad-work is different. He has me moving with my hips a lot more, and turning with my hips and turning into my shots. I’m using my momentum more to bring the shots together. I’ve been told I hit very hard – I never hit myself, so I don’t know – and he has me slowing down and focusing on movement.”

At 35, she could be forgiven for turning things down a notch after her amateur career, but O’Leary says if people have faith in her abilities she is not going to let them down.

“Boxing is a sport you are always going to be learning things. I do some coaching with kids, and you see how they’re taking things up. Even already I can see an improvement and change in my style, an improvement in the way I can stalk the opponents. Pro-boxing is tap-tap-boom, you set up a trap. It’s about picking the shots. Eddie has been doing a lot of tactical work with me.”

Coming from a different background but still ring-savvy, Cathy McAleer is leaving karate and kickboxing behind for the pro-rings.

She says boxing was her first love as a child growing up in Belfast, but at that time the sport was not open to girls or at least in her family’s eyes it wasn’t open to girls. She was steered into karate as it was perceived to be gentler.

Holding two world titles in karate and one for full-contact kickboxing as well as spending time as Northern Ireland’s national karate coach, McAleer’s ultimate aim is to add a fourth world title in another fighting discipline to her record.

“Karate is hit, score and then move on. It was seen as less full contact for that age. Boxing was seen as something male, but I wanted to do boxing from the start. But karate has been really good to me, it gave me so much self-confidence. I used to be quiet and so shy, but it takes that out of you.”

Her move into kickboxing came after a few years of inactivity when a chance meeting with a kickboxing coach led to a challenge to get fit again and compete. Job done, she took on the Irish and international kickboxing world.

“It’s kickboxing but my fights were predominantly punching. You had to get off six kicks in a round, but I would say I punched heavier than most of the women I fought and [hit ]more often.”

Training now with renowned boxing coach John Breen, he says she is the first woman he has trained for the ring. Another barrier down for McAleer.

One thing which has remained consistent is her weight division, competing between 52kg and 55kg now for over two decades. At 40, she says making that weight is not easy any longer, but not impossible as long as she stays away from the Halloween sweets.

Like O’Leary, training for her upcoming bout is taking over her daily schedule. She has curtailed her afternoon work with clients so she still has energy for the evening training sessions, and her mornings are dedicated to the traditional running, with up to seven miles going in daily.

“The boxing training is different. The style is a lot tighter as you can’t rely on kicks to close the distance. And it’s restrictive, only punching which is good too. You can focus on your hands, you’re not watching out for knees or a kick to the head.

“I feel the injuries would be less, you don’t have that vicious clash of shin on shin. You’re working with your hands, it’s about timing. I haven’t thrown a kick in training yet, but I have to watch that.”

McAleer laughs as she describes going to throw a spinning back fist which is an attacking move quite common in kickboxing but a foul in boxing. Day by day those old habits are being drummed out of her hands.

Both women are treading a path worn to some extent already. WBC boxing champion Christina McMahon from Monaghan made the switch through kickboxing to amateur boxing to her final outings as a pro-boxer. And Katie Taylor has made a triumph of her jump from the amateur ranks to professional fighting.

But can O’Leary and McAleer make a full-time living from boxing? They say until they have clocked up a few more bouts it is impossible to take such a risk.

McAleer runs her own training business MACFIT and karate schools. She says: “It’s difficult to get women on to a fight card, but things are changing. I feel more promoters are interested in that now than say 10 years ago. It’s exciting at this time, I think. It feels like it’s starting to kick off. It’s probably good timing for me.”

O’Leary is still working full-time based in Limerick as a social care worker with the homeless. That is a five days a week role, and now there are added training sessions in Dublin and workouts at Functional Fitness in Limerick.

She does media interviews in the car while fellow Limerick boxer Graham McCormack drives them back from Dublin, and says the support from her workmates has been crucial to making the jump to pro. Many of them are planning a trip to the fights, but she says the day to day tolerance of this other life is as important as ringside support.

“It’s tiring, it’s tiring. I won’t lie. But it’s coming together now. It’s not so tiring that I’m having doubts about it. I get into the car motivated, drive up to Dublin and enjoy training – I’m just pouring myself into it really. We will just have to see what happens next.”