Sonia O’Sullivan: Cleaning up athletics more of a priority than chasing the past 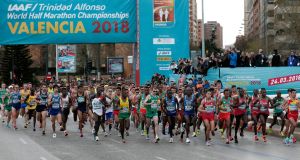 Running is the most popular sport in the world. More people run than partake in any other sport, and more people participate in running events – even if these are mostly the big city marathons and other mass participation races.

This was the prevalent message and the mantra at the World Running Seminar, held in conjunction with the World Half Marathon in Valencia last weekend. And they were plenty of numbers to back it up.

This biannual event has had a rollercoaster existence in recent years, similar to the slowly vanishing World Cross Country, but on this occasion seemed to be on the crest of a welcome revival. With 15,000 mass runners alongside the elite entries, and bringing a similar audience of people onto the streets to watch, it created a great buzz around the finish line and the city as a whole.

I also met a few runners on the plane over and back, as it attracted quite a few from outside of Spain. All ages too, a half marathon a little less daunting that the full marathon, but still bringing out the masses.

This was helped by the location. Valencia is a beautiful city, known as the city of running due to the many marked trails that run through the city in a dry riverbed.

After a disastrous flood in 1957, the River Turia was redirected in the 1960s, and the remaining dried out riverbed now boasts a massive sporting precinct; beautiful gardens and orange trees, leading to an animal park, with plenty of sports fields dotted along the way, even a full-size athletics track.

The good vibes and positive energy wasn’t lost on the elite runners that had come from over 80 countries to collect $295,000 of prize money on offer including $50,000 for a world record bonus which was collected by Netsanet Gudeta Kebede of Ethiopia who ran 66:11, breaking the 11-year old record held by Lornah Kiplagat set at the 2007 edition of these championships.

The mass participation race added to the crowds lining the streets, a world-class start and finish line for every runner, a taste of what it’s like to run in a world championship event and be a part of a world record race. The unusually late start time of 5pm also added to the atmosphere.

Kenya’s Stephen Kamworor defended his title for the second time, the current World Cross Country Champion gliding along the road, covering the final 5km in a shade over 13 minutes, taking full advantage of the following wind. The individual and team medals were dominated by Kenya, Ethiopia and Bahrain, a team made up of former east African athletes.

That’s one of the issues that has clouded athletics in recent years, but should be cleared up when the new change of allegiance rules are put in place later this year. Currently there is a freeze on any changes of nationalities, and it will still take some years to weed out the absurd transfers that were allowed to process, not for any national pride or allegiance, but purely financial reasons.

I later met Ireland’s Lizzie Lee and Claire McCarthy as they crossed the finish line, both running personal best times on a most unlikely day but this was the World Championships so what better place to run your best time.

In a world where there are more people running than any other sport, there must be more runners in Ireland who have yet to reach their potential, who may have just started running and need to realise with some proper training and direction they can set their sights far beyond what they ever thought possible.

More work needs to be done to draw this towards the more competitive end: people like to support people they know, that they are more likely to come and stay at a national championships if there was a club mile or some sort of county challenge.

Masters athletics is also a huge growth area that should be used to drive the championships, with exhibition races, or maybe a handicap race, depending on age, which could be a bit of fun, because the focus needs to be on enjoyment. Only last weekend Irish masters won 29 medals at the European Masters Championships in Madrid, including eight gold medals.

Part of the World Half Marathon was the staging of the running seminar, aimed at all aspects of the sport, including the organisation of such races. For me, one of more interesting components was a presentation by the new IAAF Athletics Integrity Unit, because I think cleaning up current athletics is more of a priority than chasing the past, even though the past shouldn’t be set aside forever.

The question is growing all the time: can we truly believe what we are watching, the constant chase to be better all the time, breaking records, winning streaks and prize money.

It all adds to the pressure on athletes and sometimes they are forced down the wrong path. Many have got away with things down through the years but like everything in life now, everything is being recorded and monitored, and added to this is the Athletics Integrity Unit, set up alongside but totally separate to the IAAF at their offices in Monaco.

Their aim and purpose is to pinpoint anomalies in athletes’ blood profiles, anomalies in their training routine and patterns, and with time and evidence weed out the athletes that feel they need to cheat to be a part of sport, those who can’t just be the best they can be within the rules, but choose to step outside the boundaries.

Just like social media is being used to grow an athlete’s career it is now also being used to monitor athletes, ensuring they are training where they say they are. It’s not enough to rely on drug test results any longer; there is the complete lifestyle of the athlete that needs to be monitored.

It makes sense, but when you look at the numbers involved you do wonder how long it will take to fully control and manage the continuous doping in sport by athletes. More funding is needed, though the Alfonso Trinidad foundation, sponsors of the World Half Marathon, put in an extra $50,000 purely for testing more athletes.

The World marathon majors have their own separate testing pool for athletes contracted to run the biggest marathons in the world: London, Berlin, Boston New York, Chicago and Tokyo all determined to have a clean sport and races with honest athletes.

Some athletes will continue to cheat, as they won’t fall in to any of the testing pools, but as the chances of getting caught are greater, so too the risks are greater. I’m not sure all athletes that cheat fully think through what they are doing and the likely consequences; maybe they believe like the Australian cricketers that everyone else is doing the same thing so what’s the harm, until they get caught?

The positive thing is more people are being exposed and with this maybe the realisation dawns that there really is no need to cheat. The Athletics Integrity Unit won’t weed out all the cheats, and within the sport I think the issue is being talked about more openly than ever before. It has to be when running is the most popular sport in the world.