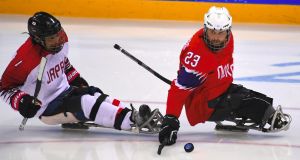 I’ve been sucked into the wonder of sled hockey at the Pyeongchang Winter Paralympic Games. Photograph: Jung Yeon-je/AFP/Getty Images

Is it just me who leads a sad life where I’ve tuned into the Winter Paralympics? A friend of mine got so engrossed in the Winter Olympics we mocked him relentlessly for his strategic napping, lecture skipping and social life ending lifestyle. But, you know what they say, mocking is catching.

I bizarrely found myself getting insane cabin fever during the snow and I saw an advert on Channel 4 for the Winter Paralympics. I flashed back through the messages of how we describe winter sports. From describing hockey as “zoom zoom on knives” to snowboard racing as “the Winter version of the Hunger Games”, I found myself getting more and more hooked on the notion that people with disabilities are doing the same.

In 2013, I found myself on a weird journey to Bath courtesy of the CBBC where I was challenged to go on a bobsleigh. I love thrills, I love speed, but I’m too small for rollercoasters. In a way, it’s almost like ordering Barry’s tea but getting Lyon’s instead, that’s how much of a tragedy it is.

So, when I was offered the role of a mini-pilot I took the chance. We arrived in Bath they told it to me straight: the aim is to go from 0-90 in under a second if you want to win a medal. No pressure then.

After a few goes, I could feel my inner child coming out. I sounded like my niece when her uncles spin her around. “Again, again, AGAAAAIIIIN!”. Eventually, my fellow bobsleighers were reduced to sweaty and tired messes. Cool runnings made bobsleigh cool, I turned it into a sport where I and only I could dictate.

While bobsleigh is not coming to the Paralympics until 2022, I had to find a new sport to get into, something that would keep my adrenaline up while I gasped horrified at the sight of people having their ankles cut open by millimetre wide blades. So, naturally, I started watching sled hockey. It’s zoom zoom on knife shoes but without the knife shoes. Instead, they use two blades on a metal frame to allow the puck to zoom in and out.

Created in Sweden by two physically disabled men, sled hockey was designed to enable people with physical disabilities to carry on playing the sport they once loved before they got their disability. It also encouraged people who are disabled from birth an outlet, socially, physically and mentally.

The range of medals being won by various countries has shown that sled hockey has potential. 1971 saw the first competition between five countries across Europe. As time passed, other countries followed the trend with Great Britain, Canada, USA, Estonia and Japan all joining in.

Then, in 1994, the holy grail arrived. Sledge hockey was now officially a Paralympic sport. At that first competition in Lillehammer, Norway, Sweden claimed the first gold medal. In 1998 in Japan, Norway took gold with Canada and Sweden claiming silver and bronze. For the 2002 Games in Utah,the gold medal was won by the United States with Norway and Sweden second and third.

In 2006, Torino saw the gold medal go to Canada, silver to Norway, and bronze to the United States. And in 2010, history was made as now females could compete alongside the men, thus, opening up a new talent pool.

While the medals have been dispersed among the same collective in sledge hockey, it’s a sport that is garnering attention for its high-paced zoom zoom, if you like, and high level of skill and reflexes. It also takes incredible upper and lower body skill and strength while also relying on mental capabilities. One slip, be it psychological or physical, and your team may concede.

Watching this satisfied my craving for thrills, spills, crashes and drama. Add to that the mix of characters such as Japanese goalkeeper, Shinobu Fukushima, who is 61, and Swedish players Goran Karlsson and Kenth Jonsson, who are both 54 and are practically coach and assistant coach, as they advise real-life coach Erik Vikstroem on logistics like pregame skates and meal times.

While in Europe and Japan, the old men sleigh, USA and Canada have blended youth with experience it will be interesting to see who comes out on top.

So, while everyone here celebrates St Patrick’s Day and are out celebrating, think of this sad loser who has now become what she mocked her friend over. Sleep deprived, no social life, but in my best Tom Cruise impression, I feel the need, the need for speed.