Sonia O’Sullivan: Women’s athletics has changed beyond all recognition 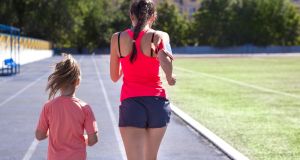 I used to run alone for many years . . . Now there are more women than men out running the roads around Cobh, which has one of the largest growing clubs in Cork with close to 200 adult members. Photograph: Getty Images/iStock

Almost as far back as I can remember women always had their own place and sense of achievement in sport. As far back as 1984, to be exact.

It was the Cork Evening Echo women’s mini-marathon. I wouldn’t have known at the time, but it had already been taking place for two years, and then in its third year, a group of us junior girls from Ballymore Cobh AC decided we would sign up and give ourselves a day out. After a short trip on the train, from Cobh to Cork city, we found many of the streets had been closed for a few hours already and with that a mass of women set off from outside the newspaper offices on Academy Street.

I remember it clearly, as I still have a picture of the start from the front page of the Evening Echo the next day. Like any young athlete, when the gun was fired – or loud canon, as it was back then – I ran flat out, as fast I could, and actually led the field of women out on to Patrick Street. I’m sure many of the more seasoned athletes in the race were asking themselves who is this young girl? Does she even know how far 10km is?

Even at the time this was a big race, one of the few women-only races in the world, and some of the best Irish runners were lined up. I remember a top French woman as well, Véronique Marot, who went on to win, so it had an international feel about it too. These were the women runners I had read about in the Marathon magazine, women I already looked up to and admired, names such as Ailish Smyth, Mary Donohue, Carmel Lyons, Valerie O’Mahony, from big city clubs too such as Dublin City Harriers.

It never crossed our minds either as 14-year-old schoolgirls, some even a bit younger, that 10km might actually be a very long run

We were just excited to have the chance to run alongside them as the crowds cheered and waved us on. We certainly hadn’t heard of anything such as International Women’s Day, or that we were doing something particularly different.

It never crossed our minds either as 14-year-old schoolgirls, some even a bit younger, that 10km might actually be a very long run. This was a big event for women and we saw no reason not to be a part of it. And I can still remember where I finished as well: ninth, in around 37 minutes. In the top 10, so I was rewarded with a pair of runners, a definite light bulb moment, an introduction to running rewards from the local Adidas supplier, and the Lee Road series of races where I was becoming a more familiar sight.

It was also around this time that women really started to get noticed for their sporting achievements, and particularly in athletics. In fact, 1984 was a sort of boom year for women’s running with the introduction of the women’s marathon for the first time ever at the 1984 Olympics in Los Angeles.

Running was viewed as something that everyone could do, and just like it is today, a sport that is the most accessible of all. Around then women’s athletics also started to gain equal coverage and exposure. As women started to take the sport more seriously, the times were getting faster, the performances more impressive, and as more women took up the sport it became every bit as competitive as the male equivalent.

There was already some history there: in 1928, when women first competed in athletics at the Olympics, they only made up 10 per cent of the total athletes taking part. It took 32 years for this number to improve to 20 per cent. Just before this, at the 1956 Olympics in Melbourne, Maeve Kyle became Ireland’s first woman athlete to compete at the Olympics in athletics, even though she was limited to the 100m and 200m.

From the early 1990s women’s athletics continued to grow. This coincided with my first international steps and as it was always played out alongside the men. In a way I feel fortunate to have fallen into a sport where you compete against women, but on the same stage and in front of the same audience as men.

It has still taken some time for women to have equal events to men: the women’s pole vault was introduced first in 1999, followed by the 3,000m steeplechase at the 2005 World championships. Greatness takes time to evolve and to be embraced, especially across the myriad of different sports that women now compete in. Some might question this, give some sports’ instant greatness, but it’s always been an evolving thing to accept something different, to see it for what it is, and also see if it reaches its potential for growth over time.

Women’s sport has changed drastically from the early days, not just at the elite side of sport, but at all levels of fitness

When you look around now at the wide choice of sports available to girls, and role models that they have to look up to, it’s easy to understand some of the frustration with the lack of coverage and exposure. But instant gratification is never as memorable or meaningful as something that you have consistently worked hard at for years, always believing in yourself, and knowing that one day you will be rewarded. Sometimes the hardest part is to find the sport that you want to commit to and persist with, while making sure you have the desire to push through barriers that some will always think are insurmountable.

As much as it is a positive thing to have a choice of sports for women, this also causes dilution of the talent pool, which can add more to the time taken to find success. Often young children play sport so that they can spend time with their friends: then comes a time when you find you might be better at something else and with that comes the difficult transition phase.

Women’s sport has changed drastically from the early days, not just at the elite side of sport, but at all levels of fitness. The largest sector of the sports market is driven by women. When I first started running there were no women specific shoes or gear. There were big chunky runners and baggy tracksuits, same as the men, only now so much has changed. Women now make up more than 45 per cent of competitors at an Olympics.

I also used to run alone for many years, through parks and along rivers around the roads of Cobh. There were a handful of regular runners in the town, nearly all men. Now there are more women than men out running the roads around Cobh, which has one of the largest growing clubs in Cork with close to 200 adult members. When it all started for me, there were actually no women members in the club, only a bunch of us schoolgirls having fun and raring for a day out at the women’s mini-marathon, well over 30 years ago now. How things have changed with time, persistence and patience.