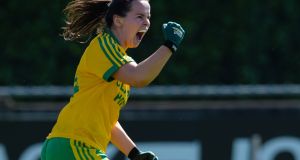 Geraldine McLaughlin: returned to the fray for Donegal in the win over Monaghan. Photograph: Tom Beary/Inpho

I’ve spoken before in this column about the importance of doubleheaders, and this week is no different.

As the LGFA and GAA make strides in reducing gender difference and promoting both men’s and women’s football, history will be made this week in the north-west of Ireland where, for the first time ever, both Donegal teams will be lining out in Ballybofey for a league double-header. Donegal women take on Kerry to try and secure a place in the league semi-finals, while Mayo and Donegal lock horns in a crucial relegation clash – the losers facing the dreaded drop.

The Donegal women have been on a roll lately after trouncing Westmeath and beating Ulster rivals Monaghan. Kerry, in contrast, have lost the last two in a row, to both Galway and Monaghan.

Kerry’s last outing in Killarney was frustrating as they were dominated from the kick-outs and, in the first half alone, five of Galway’s six forwards were on target while Kerry struggled after the 13th minute to muster any attack.

Against Monaghan, Kerry were unlucky as Monaghan became a wrecking ball in the second half, with Ciara McAnespie scoring for fun and hitting four points on the trot.

The bonus for Kerry manager Graham Shine is that his charges never gave up against Monaghan, hitting a purple patch in the final quarter.

Against Galway, Kerry subs grabbed what was left of the game by the scruff of the neck. Eilish O’Callaghan’s first touch was a shot past Lisa Murphy to raise a Kerry green flag for their first score from play while another replacement Andrea Murphy had Kerry’s first point from play a minute later.

Kerry need to improve, however, and become more clinical against Donegal while they must tighten up on their kick-outs. While a significant breeze was a factor against Galway, Kerry still failed to win a kick-out thus depriving their attack any chance to progress after every restart.

For Donegal, it could not be any more different. Super scorer from Glenfin Yvonne Bonner has contributed 4-8 alone in the last two games, while they also brought back Geraldine McLaughlin to the fray against Monaghan and she got a rousing reception from travelling fans.

Against Westmeath, it was one-way traffic. Donegal hit five points in a row through two scores from Bonner, Katy Herron, Aoife McDonnell and Guthrie. Eilish Ward tucked home Donegal’s fifth before a beautiful move, involving a handful of players, concluded with Bonner bagging the hat-trick.

Newbie Sarah Jane McDonald scored a quick 1-1 while Gráinne Houston also got in on the act. The Westmeath defence was sliced open again for McDonnell to net and Donegal concluded with Houston and former Irish soccer international Ciara Grant tacking on points to complete the 36-point victory.

All in all, it proves an exciting curtain-raiser to the men’s crucial relegation clash. Kerry sit just three points away from relegation, while Donegal have amassed seven points from 12, lagging behind Cork and Dublin.

While one eye will be on the Cork and Mayo game from a Donegal perspective, they can be confident that if they maintain their winning streak, they will be in the hunt for the league decider while also being looked upon as worthy contenders in the championship.

For Kerry, it’s now a must-not lose game, as pressure mounts on the once Munster top dogs. Fail in the league and you will face into even tougher competition in Munster with new kids Tipperary and Waterford contesting like never before.

Titles are won in the final weeks in the league, but both Donegal teams could not be in a more different position. Lose, and the men’s side are relegated to Division Two. Victory for the ladies team, and well, their journey carries on to something more special.

Throw-in for the women’s match is Sunday at 1pm in MacCumhaill Park, while the men’s game commences at 3pm.