Sonia O’Sullivan: Early rise and late to bed causing me a racket 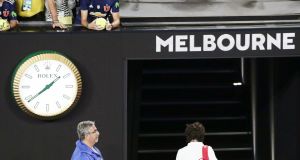 Carla Suarez Navarro leaves the court at 1.40am after losing against Caroline Wozniacki at the Australian Open. Photograph: Mark Cristino/EPA

Some people may be surprised to hear I’ve never been a morning person. As the years go on, I do find myself getting up earlier and earlier, although that doesn’t make it any easier. These days, it’s mostly to link up with a group to get a good bike ride in before most people are up having breakfast.

I can’t do it every day, but some days I make a point of setting the alarm, making sure all my gear is ready to go, before my watch starts ringing at 5.25am, not so gently rousing me from my sleep.

It’s a strange thing because most people I meet assume that all athletes are up bright and early, training hard throughout their athletics careers. That certainly wasn’t the case for me.

In my teenage years, I always trained after school. I wore my training gear to school under my uniform, and a bit like Clark Kent in the phone box, within minutes of the school bell ringing I was changed and out running around the school fields in Cobh. From schoolgirl to aspiring Olympic athlete just like that.

When I went to Villanova University, the team met for training every day at 1pm. One thing we were always reminded of was the wise words from the famous Villanova men’s coach Jumbo Elliott: “live like a clock”, whatever exactly than means. Once you get into a daily training time habit, everything else in the day just seems to revolve around that.

After college, I spent many years in Teddington in London, and the training time was 10am. Again, plenty of time to wake up and have a cup of coffee, a small breakfast, and some stretching before ambling out for the morning run.

The track sessions were also at 10am, although by the time you finished up, half the day was gone already. We often ran back from the track through Kingston-upon-Thames town centre, weaving amongst the lunchtime crowds in the market place. Then we’d all lounge around for a few hours in the afternoon.

That to me was always the life of a full-time athlete: so many hours in the day, but only so many that can be filled with training.

Some days were busier than others, especially when you had to fit in a gym session, a massage or physiotherapy session. Later in the day, there would usually be another easy evening run.

So it’s no wonder that I dread the early morning bike rides. It still feels out of sync with my natural waking time. Still, it never ceases to surprise me how quickly I am tuned in, and glad I resisted the temptation to turn over and grab an extra hour of sleep.

A recent study found that as a nation, Australians are the earliest to bed and earliest to rise. I’m not sure where Ireland fits on that study, but even after all these years in Australia, I still haven’t mastered the early to bed part of this equation.

It’s been extra tricky this week, with night after night of live tennis from the Australian Open. I never plan to get so absorbed in these games but they have been particularly good this week. Starting with Nick Kyrgios, who was the final local Aussie hope, in his fourth round match.

Up against Bulgarian Grigor Dimitriov, as they entered the fourth set, the clock was approaching midnight. I was torn between wanting the game to go the full five sets and just having it over so I could get to bed. In the end Dimitriov won out in four sets.

Every night there has been some drama and signs of a changing of the guard, especially with 21-year-old South Korean Hyeon Chung overcoming six-time champion Novak Djokovic. One of the crowd favourites Rafael Nadal also had to walk away with injury after four sets to let Marin Cilic march on to the quarter-finals.

Never a dull moment, and the tennis has thankfully taken over from the saturation of cricket I endured at Falls Creek.

The one thing I have really missed this year is the women’s matches, as the evening games for women are scheduled after the men’s. If I have any chance of making the early morning bike rides I have to switch off before these games even begin.

In previous years, the women were on early evening, then the men’s games often ran until early hours of the morning. The longest ever involved Lleyton Hewitt, who went all the way to 4.30am in 2008, probably finishing up as some people getting ready to head out for an early morning bike ride.

As I was labouring over the laptop earlier this week, I left the TV on in the other room, knowing Caroline Wozniacki was playing and I could have a quick check on the score and hope it wouldn’t keep me up too late. As it turned out Wozniacki left the court at 1.37am to earn her place in the women’s quarter finals, probably not getting to bed before 3am.

It can’t be easy starting a game as the clock approaches midnight. It looks like half the seats have emptied out as it’s already past most Australians’ bedtime – maybe they’ve all got a bike ride planned for the early morning.

As hard as it is to get out on the bike so early, once up and awake I find myself trying to fill every minute, ending up just missing the group by minutes as they speed through one of the meeting points along the bike trail.

The chase is on and I find myself going from sleeping to sprinting mode. When I finally caught up and join in, the planned hill session it couldn’t be more fun, digging deep, legs screaming, catching flies and laughing to overcome the pain as we crest each hill.

The adrenalin and exhilaration have completely taken over. If only I could feel this as the alarm bells start ringing early in the morning.