Sonia O’Sullivan: A bike ride into the unknown hits the heights 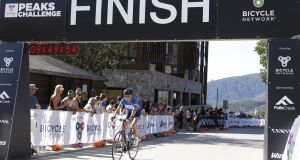 I hadn’t been so apprehensive or nervous about an event for a long time. Not since my own competitive days maybe, or when last on the start line for a marathon, in Dublin in 2015.

It was 6:30am on Sunday morning, it was still dark, and I was on a different sort of start line. This time waiting patiently to clip into my bike and embark on a road I had never before travelled so far or climbed so high.

This was the Peaks Challenge Falls Creek, a cycling event over 235km, climbing over 4,000m, and the pressure on everyone to get back within the 13 hours cut-off and claim their finisher’s jersey.

It’s not like a running event where you just turn up and collect your number: there’s always so much more involved when it comes to cycling. This was also my first time to compete in a race, though primarily against the clock, and unsure what to expect – just hoping I would get a clean run without any mechanicals or punctures along the way.

On Saturday, I had to go for a bike check before collecting my timing chip. Then there was the introduction to the pacers for each wave, I was still uncertain which wave I should start in. I caught the end of the nine-hour talk, sat in on the 10-hour and 11-hour, then tried to make up my mind.

A bit like deciding the day before the marathon if you are going to try to run sub three hours, 3:15 or 3:30 pace. Only cycling was a whole different story, definitely a ride into the unknown.

I still had to lay out my food supplies for the next day, and cook up a batch of polenta bites, which are wrapped up and sent out to the rest areas where they could be picked up along the way.

After talking to a few repeat Peaks riders, messaging a friend and weighing things up I decided to move up to Wave 2 – sub-10 hours.

The alpine sun has come out to welcome us back to one of our favourite weekends, Peaks Challenge Falls Creek. Who's here? #Peaks18 #PeaksChallenge pic.twitter.com/GhLvclbxVw

We were starting at the top of a mountain, straight down from Falls Creek Village, sitting on 1,600m altitude, 30km downhill, 1,500 riders all anxious to get this long day underway. Mount Beauty at the base of the mountain was when I could finally relax, just trying to stay calm on the descent with riders whizzing past on both sides, occasionally passing a few myself. Then it was the first climb over Tawonga Gap.

A flat stretch to Harrietville was reached after 70km, a quick pit stop and a banana and it was time to refocus on the 30km climb back up over 1,600m to Mount Hotham. I started off talking to one of the lads I’d met the day before, amazing how in all those people you can meet someone you recognise, then another lad from Belfast living in Sydney chatted for about 5km. It’s nice to ride along and talk but then the hill kicks in and all you can hear is deep breathing in the quiet mountain air.

Each pedal stroke is one bit closer to the summit. Once up and over the summit there was 12km of undulations before the lunch stop at Dinner Plain.

At 112km, I was ready for something to eat and both my water bottles were empty. I rode in with another of the girls and we were both surprised at the announcement as we arrived that the 10-hour pacers would be leaving in four minutes. We were sure we were ahead as we had not sighted the pacers up to this point; they must’ve been ahead of schedule.

It was a manic dash through this barren countryside, everyone hanging on to avoid getting left riding alone in the wilderness

There was a pace sticker you placed on the top tube of the bike, so you could keep track of time. It didn’t take long to work out these 10 hours pacers were not like marathon pacers: they were racers and trying to get well ahead of schedule, so there was plenty time to get through the dreaded final climb at the back of Falls Creek.

Next stop was Omeo, a one-horse town, 40km of nothing but rolling fields and a road cutting through. It was a manic dash through this barren countryside, everyone hanging on to avoid getting left riding alone in the wilderness. I didn’t notice then but later discovered I reached my maximum speed ever, 80km/hr.

Another drink stop before climbing back out of Omeo across the plains to Anglers rest: the final food stop and more polenta, electrolytes and water. I missed the pacers racing off, but could see on my real time watch that I was 20 minutes ahead of schedule. Surely I could hang on for the last 46km?

It was back to Falls Creek to complete the loop, just 22km of climbing, starting as you rounded WTF corner (Way to Falls) a 10 per cent gradient for 7km, seemingly never ending as you round one corner after another. I had practised this road a few times in January, but there is no preparing for such a climb with 200km of cycling already in the legs.

By this stage there were riders sitting on the side of the road, some that had caught the express 10-hour train were left cramping on the roadside. The temperature was up over 30 degrees as riders were trying to catch any bit of shade along the roadside. I just kept pedalling – alternating sitting and standing – counting to 10 and repeating trying to keep standing then down for 10.

Trapyard Gap was the final stop, I could feel the cramps in my legs but I had to stop and grab a Coke, I was told this was a necessary evil to get you through the final 23km. I knew this road well, crossing paths with so many running trails I had trained on over the years. So near and yet so far.

With time to spare I took a few minutes to catch my breath and gear up for the final segment. Both legs were now cramping, and I asked a passing cyclist what best to do? Keep cycling, he said. It felt better to stand up but I couldn’t stand all the way back either.

I worked out I need to drink more water, keep changing position, 15km left and the road was even more familiar . . . Langfords West, then Langfords Gap, with a headwind too. It was important to latch on to the back of some riders and get carried to the final 400m climb before dropping down to the finish line.

Rescued by three riders who came past in matching pink strip, I slotted in, put my head down and knew I would get in under 10 hours. You’re just never certain until you see that finish line clock.

Safely up the final hill, crossing the line with 20 minutes to spare, I would get the sub 10 hour jersey, but the relief of completing the circuit is the greatest satisfaction, no less satisfying than completing a marathon.

At last, I could get off the bike and lie down on the hard road. It was some time before I could get back up again.

1 Cian Healy: ‘Realistically I got away with murder when I was younger’
2 Seán O’Brien: Anger over my parents’ break-up never left me
3 Robbie Henshaw likely to be the only Irish change for France finale
4 Bartomeu resigns and drops bombshell of Barcelona joining European Super League
5 Ireland's centre will hold thanks to Henshaw and Aki’s midfield muscle memory
Real news has value SUBSCRIBE
Here is your handy guide to sport on television this week