Mary Hannigan: Why the BBC were right to pay McEnroe more than Navratilova

This isn’t about how great they were at tennis, it’s about their current standing in broadcasting 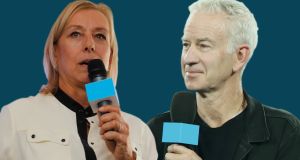 John McEnroe is Mr Box Office when it comes to tennis broadcasting, which is why he earns the big bucks.

In all the kerfuffle that followed Martina Navratilova’s appearance on Panorama’s ‘Britain’s Equal Pay Scandal’ on Monday, it was sadly inevitable that innocents would get caught in the crossfire.

“The bigger scandal is Andrew Castle being paid anything to commentate on tennis,” said one especially cruel contributor to the debate online.

But most of the indignation was reserved for the revelation that Navratilova was paid £15,000 by the BBC for her work as a contributor to their Wimbledon coverage last year, compared to the £150,000 she said they paid John McEnroe.

On the face of it, that’s a gobsmacking disparity.

“He’s getting at least 10 times as much money as I am for very comparable work,” she said. “It’s shocking. It’s still the good old boys’ network. The bottom line is that male voices are valued more than women’s voices.”

But. You know what they say, choose your (gender pay equality) battles wisely. And this one was on shaky ground. Considering both their Wimbledon workloads last year, if Navratilova had been paid the same or similar to McEnroe he’d have been entitled to another ‘YOU CANNOT BE SERIOUS’.

As the BBC pointed out in their statement, Navratilova’s “work amounted to three live match commentaries, four highlights appearances, one short video and two other short studio appearances”, whereas McEnroe “worked on live match commentaries on 12 of the 13 days along with highlights programmes, opening links, regular studio pieces with Sue Barker, studio analysis, filmed sequences and 606 programmes for BBC Radio 5 Live [he did frequent phone-ins answering listeners’ questions], as well as publicity work”.

That’s like saying your backhand is very comparable to Roger Federer’s.

Their contracts with the BBC were different too, Navratilova having no commitment beyond the fixed amount of work she did for them, McEnroe “on call across the entire 13 days of the tournament”.

If the BBC had left their statement there, they’d have been home and hosed. But they produced the mother of all facepalm moments when attempting to contrast McEnroe’s standing and experience in tennis broadcasting (“he is widely considered to be the best expert/commentator in the sport”) with that of Navratilova.

There is a contrast, but to imply that her “profile and expertise” aren’t as great as his was doofus stuff, this being a woman who amassed 18 Grand Slam titles and 167 titles overall and is probably only challenged by Serena Williams and Steffi Graf for the title of ‘Greatest Female Player of all Time’. Profile and expertise in the game she does not lack. It’s not as if her finest hour in tennis was, say, reaching the second round of the South Dakota Open in 1982.

But McEnroe is Mr Box Office when it comes to tennis broadcasting, which is why he earns the big bucks. He’s not everyone’s mug of tea, and there are plenty who would find Navratilova’s punditry more insightful and illuminating. And his tendency to chat in the middle of rallies probably has poor old Dan Maskel spinning in his grave.

But the sometimes controversial, always opinionated, often provocative and usually entertaining fare he provides is the type that attracts humongous pay-checks in TV land. That he earned 10 times more than Navratilova looks a shocker, even with his much greater workload, but TV salaries rarely fail to surprise. Claudia Winkleman, for example, earns £300,000 more than John Simpson. One co-presents Strictly Come Dancing, the other reports from war zones in the Middle East. Ratings, m’lud. Mind you, she was one of the few BBC women on that salary list last year who had much to shout about.

If the BBC based their fees for their contributors on what they achieved in their sport, then McEnroe would be asking Navratilova for a loan. But this isn’t about how great they were at tennis, it’s about their current standing in broadcasting about it - and McEnroe, love him or loathe him, is top of the rankings.

Granted, it’s entering La-La Land to bring up ‘I’m A Celebrity . . . Get Me Out Of Here’, but back in 2008 there was a to-do about the fees paid to the contestants, Navratilova receiving significantly more (£30,000) than several of her camp-mates who were going to spend the same amount of time munching on crocodile’s testicles. A ‘Page Three Girl’ for The Sun was said to be particularly peeved that she was only getting £7,500. There was no gender pay parity in the jungle.

But the disparity was perfectly reasonable, Navratilova was the biggest name in that particular series and was paid accordingly. The one and mercifully only Robert Kilroy-Silk was only paid half of her fee. Many would have argued it was a half too much.

Around seven years back McEnroe’s old doubles partner Peter Fleming was getting paid for a fortnight’s work at Wimbledon by the BBC what they were paying McEnroe in a day. Fleming jacked it in because he didn’t think it was worth it. McEnroe was box office, he wasn’t. That’s just how it works. It’s not always a boy/girl thing. There are big fish to fry on the pay parity front, this isn’t one of them. (And leave Andrew Castle out of it).