Sonia O’Sullivan: Can rugby really call itself a global sport? 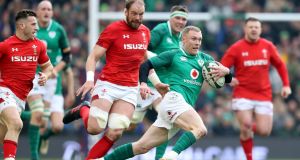 Ireland’s Keith Earls against Wales at the Aviva Stadium in Dublin. You would expect there might just be some small report of the match in the Australian papers. Photograph: Bryan Keane/Inpho

I was in my local cafe in Melbourne on Monday morning, scanning the papers for a report or even a result of the game. But nothing, not so much as a word.

There’s no doubt Irish rugby is currently the most successful sport in the country, with an Ireland team that has grabbed the attention of the nation. There have been some recent moments that no doubt stopped the nation, particularly when Johnny Sexton kicked the winning drop goal against France a few weeks ago, and that dominant victory over Wales at the Aviva Stadium last Saturday.

When you are aware of the enormity of such games back at home – all your friends and family talking about the results – you expect there might just be some small report in the Australian papers.

It’s not like Australia doesn’t consider itself a successful rugby nation, although their team isn’t in a great place at the moment, which may have something to do with it. But if you didn’t actually know about the Six Nations it would easily go unnoticed. After all, Australia have won the Rugby World Cup twice, just one less than the mighty All Blacks.

And yet the Six Nations competition doesn’t register a blip on the radar in Australia. At least not in Melbourne, although maybe it will be different when I’m in Sydney on March 17th when Ireland face England at Twickenham.

When I try to work this out, weigh things up, and look at the numbers and statistics, it does ask the question: is rugby a truly global sport? There isn’t actually much to back that up, and yet sometimes it pretends to be.

There is a lot of talk in the press of what this Irish team can achieve. The Triple Crown, the Grand Slam, but at the end of the day it’s a championship of just six teams. Even when it comes to the Rugby World Cup – it , will take place in Japan next year – there will be just 20 countries involved, and only a few of those will be considered contenders.

Ireland are currently ranked third in the world, and will expect to be right in the mix. How exciting it would be if the Irish team were to reach the final stages, something they have yet to achieve.

When you read between the lines of this Irish rugby team you can see they want more, want to be greater than Six Nations champions, greater than winning the Grand Slam.

Their fate awaits in Japan, to do more than just win in your own backyard, but to be competitive on the world stage, and I have no doubt that this is the big target. This year is just a stepping stone to even greater things at the World Cup next year.

Ireland travelled to South Africa last year, and later this year they will venture to Australia. I was asked by a friend last week if I was interested in going to the game against Australia in Melbourne in June. It seems a long way off, and I can’t imagine many of the locals are online like they were when Ed Sheeran was selling tickets six months out from his concert here late last year.

Nonetheless, the Irish community is sure to be out in force weighing up how Ireland can do against Australia one year out from the World Cup. Having beaten New Zealand and South Africa in recent times, behind the closed doors of the Ireland team confidence is growing, and there will be much expected on the world stage in 2019.

Sometimes in a sport like rugby it’s not about the number of countries involved but the quality of those you’ve got to beat. To me athletics has always been a proper global sport, and we’ll see the latest staging of that with the World Indoor Athletics Championships taking place in Birmingham this weekend.

Although unless you’re an actually a fan of athletics you probably don’t even know these are on, and, like the Six Nations in Australia, they could very easily go unnoticed. Maybe if you were in a race against the same six people over a series of races this would raise the interest and build some momentum going to the World Indoor Athletics Finals.

Athletics may have the greatest number of countries at a championship, but there is still just a few at the top you’ve got to beat to be the best. The only difference is that many countries get to line up and take their chances in the finals, where sometimes opportunities arise to sneak on to the podium and diversify the medal table.

This is the 17th time the World Indoor Athletics Championships will take place, and, while never as big a stage as outdoor athletics, it still hasn’t lost its favour with athletes. This is unlike the World Cross-Country Championships, which in recent years have lost some of their appeal.

One difference is that it is quite difficult to achieve qualifying standards indoors, and there are still some countries where there are no indoor tracks. In some events the equivalent standard required if run outdoors is so much quicker. An example is the women’s 1,500m, where you can qualify by running under 4:11 indoors. If you don’t have an indoor time you would need to have run under 4:02 outdoors since January 2017.

The overall thinking is to make a more concise and more competitive programme of championships events, with fewer rounds required to get to finals.

There are only five athletes representing Ireland, though we have a good history of bringing home medals. There have been 11 medals down through the years, the most recent the gold medal won by Derval O’Rourke in the 60m hurdles in Moscow 12 years ago.

Of our five, the athlete with the best racing form this indoor season has been Phil Healy over 400m. There are 36 athletes in the first round that will need to be whittled down to just six in the final. On paper Phil is ranked sixth best time, but indoor racing over 400m doesn’t respect the paper rankings: it will come down to tactics and experience.

I feel Phil is still on an upward learning curve, and will need the perfect race and everything to fall in her favour to reach the final this weekend.

For me one race that stands out is the women’s 3,000m final, set for the short opening session this Thursday evening. Headlined by Genzebe Dibaba from Ethiopia, who hasn’t lost an indoor race in eight years, she is the twice defending champion.

There will be 14 athletes lining up, representing 11 countries. And any one of them could win. Even in that one small way, a truly global event.