Joanne O’Riordan: TG4 sports coverage brings it all back home 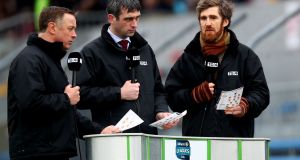 It is funny being a minor part of a large sports journalism world. Usually, I enjoy quick and snappy updates of news with no real context or background added.

But the more time I spend surfing the web looking at articles, in-depth ones or whatever, I begin to ask myself: where are all the good journalists gone?

Don’t get me wrong, I’m not specifically looking at Irish journalists, this is more of an overall thought process when reading sports journalism.

The role of the media in society is well written about, and people have their views on that, but time and time again, people eat what they are fed in the papers, on TV, on social media. As the role of the media grows exponentially, with that, the responsibility of journalists rises too.

What are they responsible for?

Many studies have been ironically done on what makes good sports journalism and what the people want. They want nuanced views, non-biased reporting and more socially responsible and educative coverage. The bit that I find more interesting is the ever-growing disparity between more critical media work and more balanced, neutral reporting. The tension between these categories is ever growing.

With limited resources, in fairness, TG4 does hold out against the heavyweights of the sports world

As media outlets sprout up due to the rise in technology, 24/7 demands for greater sports coverage and access, and of course, the consistent desire for sports reporting without an agenda. It can be quite tricky to get that perfect balance.

Broadcasters and journalists alike have the responsibility to do what the public wants, but, sometimes the people don’t know what they want. If you take a look at how the public perceive sporting scandals, some folk, like my parents and a few friends, have said they’d rather not know a specific athlete has doped or they would rather not know Nepali farmers are being killed to facilitate the Qatar World Cup.

In Ireland, you have a disparity in balanced analysis versus a person’s own private feelings. In the GAA world, it’s hard to find a balance. Disregarding print journalists for a moment, I think the broadcaster who gets it right time and time again is TG4.

Year in year out, time and time again the debate over GAA rights crops up without fail. The various big contenders vie for the rights and the result ends up somewhere in the middle but, without a doubt, the forgotten workhorse in all this is TG4. With limited resources, in fairness, it does hold out against the heavyweights of the sports world.

It manages to show ladies football, U- 21 competitions, Allianz Leagues and club championship from across the country. The weekend just gone was an incredibly exciting weekend in sports and what single broadcaster would take you from Croke Park to Ballybofey and back again.

The Trojan work being done on the ground does eventually get noticed.

Sure, you may have to delve deep into your cúpla focail to try and follow commentary and analysis, but it is a service that not many countries have. And time and time again, without fail, it pulls off an exemplary job in balancing the right amount of analysis, match coverage and interviews. Overall, it’s the current pinnacle of sports broadcasting.

Sports journalism has moved from the ‘toy department’ to the finance department, where it is now seen as crucial to the incomes and audiences of many media organisations.

As scepticism rises as to what constitutes quality, the higher profile of sports content has coincided with clicks and hits becoming the currency of news media companies.

Not only are the concepts being tested and used amid a changing political-economic landscape which measures and demands specific definitions of quality – such as how frequently an article has been clicked, liked, commented on, shared, syndicated and so forth – but the demand and desire for more and more is now stretching resources to near breaking point.

While media resources are being cut from all angles and the consequent pool shrinks to a mere drop in the ocean, it is crucial the media do not turn to click-bait journalism with a flurry of ads to keep it going.

While the desire to sell your journalistic soul may be tempting in a world where economics is more valued than quality reporting, one must understand that there is no consensus in 21st-century journalism about what constitutes quality reporting.

Maybe the organisation once seen as small broadcaster, TG4, could potentially hold the key to setting the bar for the world of sportswriting. After all, we all just want content that feels homely and not invaded by consistent reminders of how terrible the outside world really is.

1 Rory McIlroy hoping course-and-distance form will stand to him at Harding Park
2 Martial winner makes sure than Lask don’t have the last laugh
3 Shane Lowry knows back-to-back Major hopes down to his putting
4 Seán Moran: Boylan documentary offers a compelling insight into former Meath boss
5 Brooks Koepka: ‘I should probably win’ US PGA Championship
Real news has value SUBSCRIBE
Here is your handy guide to sport on television this week