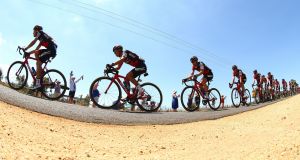 By the time the race started it was close to 40 degrees and even hotter later in the afternoon. Photograph: Robert Cianflone/Getty Images

The riders arrive with their helmets and shoes already on, their bikes lined up and waiting for collection. All their drinks and snacks spread out to get them through the early part of the race. And plenty more for restocking at the feed zones out on the road.

It’s always fascinating to see what goes on behind the scenes of elite sports people, how they prepare and get ready for the day of competition.

What you see on television or in a stadium is just the icing on the cake. I’ve always known that. So much goes on behind the scenes to be able to perform at that level, to compete and get results. Not just the competitors, but the support team usually up hours in advance prepping and laying out the tools of the trade.

Even though I’ve competed at the highest level and prepared meticulously before big events I’m still curious of how others prepare; especially the tiny intricate details that give one team or sports person the edge over another, or just belief in themselves to go out and get the job done.

So when I heard the Aqua Blue cycling team were coming to Melbourne I sensed my chance. The only Irish-owned team on the UCI pro tour, set up by Cork businessman Rick Delaney, they’ve been in Melbourne for the last week, at the first UCI World Tour race of the year, the Cadel Evans Great Ocean Road Race.

I rode around myself the day before in the People’s Ride, just ahead of the women’s elite race, over the exact same course. While mingling in the event village afterwards I bumped into a couple of Aqua Blue staff members, hoping to catch up with the team and get a little peek behind the scenes, maybe meet some of the riders.

Lucky for me I was told if I came to the back of the hotel on race day, around 9.30, I could meet the team and see how everything unfolded in the few hours before the race.

It’s hard not to be attracted to an Irish team, especially when they proudly wear the shamrock on their jersey. Aqua Blue is made up of cyclists from many nationalities, but the significance of the shamrock and the support from Irish people around the world is what sets them apart.

It’s still only Aqua Blue’s second season on the pro tour: and an impressive start, with Dutch rider Peter Koning winning the sprint classification at Race Melbourne, just days ahead of Lasse Norman Hansen from Denmark taking out the King of the Mountain jersey at the Great Ocean Road Race.

I had another incentive: next month I’ve signed up for a one day cycle event covering 235km and over 4,000 metres of climbing. It starts and finishes at Falls Creek, the alpine village that I have become familiar with from years of altitude training. I’m hoping the familiar roads around the village will be an advantage and help me get through the final stages of what will be my longest day ever on the bike. There is a 13 hour limit to make it back, so I’m gathering as many cycling tips as I can.

I know from running the Dublin Marathon a few years ago, the better prepared you are, mentally and physically, the more you enjoy the challenge. And get a real understanding and feel for what you are doing.

Even more so on a long cycle. It’s not a race, so it’s really important to get the balance right and know what you can realistically achieve. And what better way to gather knowledge than speaking to a few experts in the field.

The first thing that stands out in the pro cycling set up is the number of back room staff, supporting the riders. And this was just a mostly skeleton crew in Melbourne, as more of the team are starting preparations for the Tour of Dubai next week.

By early Sunday morning the temperature was steadily creeping up past 30 degrees; by the time the race got started it was close to 40 degrees and even hotter later in the afternoon. It would certainly slow things down a little and require careful management of fluids and fuel throughout the day.

The team area was set up perfectly, everything neat and organised. The bikes all in a line, sparkling clean. All the drinks are ice cold, one of the things that caught my eye were the handmade and perfectly wrapped rice cakes.

Apple and strawberry flavour rice cakes, not the dry rice cakes you buy in the shop, but plain white rice mixed with fresh fruit. They were perfectly packed to hold their shape and stay cold. This was real food, specially prepared to get the riders through the day. These are things that can make a difference. I was given a couple to try, and saved for later in the day when I could really appreciate them, after I spent some energy swimming in the sea.

An hour before the race, the riders are presented on stage and interviewed and then get to sign on the glass wall. There is a fair bit of waiting around before the race begins, as the crowds are gathering and the riders try to relax and stay cool.

Then the team cars are lined up to get out ahead of the riders, and I also saw this as my cue to get out the road and watch the race unfold live on the streets of Torquay for the early sprint. And later, after cooling down in the sea, back at home on television.

It was the perfect combination: seeing the preparation beforehand, then getting close up to feel the speed of the riders racing through narrow streets and around roundabouts, trying to spot the jersey with the shamrock doing Ireland proud around the world in a truly professional sport.

One other lesson: on Tuesday, I got to ride a bit with some of the Aqua Blue team, on their rest day. A nice and easy pace, naturally, easy to keep up, a bit like going for a jog with an athlete the day before a big race.

Like in Ireland, Melbourne is fighting for legislation to enforce the passing distance for cars to 1.5 metres, where there are cyclists on the road. The pro cyclists are used to training and racing on quiet roads, and admit they don’t feel particularly well protected on the open roads, and especially fear when those roads are busy.

Regular cyclists must face this fear every day, whenever a car decides to pass too close, endangering lives in the process. A lesson there for us all.