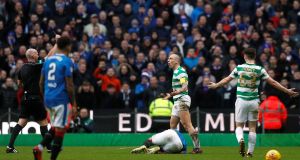 Scott Brown is booked towards the end of Celtic’s goalless draw with Rangers. Photograph: Russell Cheyne/Reuters

Celtic and Rangers battled to an Old Firm stalemate at Parkhead but the kudos went back to Ibrox with the visitors.

After a bright start by Graeme Murty’s men, the hosts dominated the first half of the Ladbrokes Premiership clash but were wasteful in front of goal.

The Light Blues came storming back after the break and only a couple of crucial saves from Hoops goalkeeper Craig Gordon denied them what would have been an unlikely win.

Brendan Rodgers’ league leaders remained 11 points clear of their city rivals but, after an end-to-end match blighted by unforced errors and with little structure at times, the Govan side will feel much more pleased with the result and performance.

Recent form had pointed to an easy afternoon for the champions, who showed three changes with midfielder Stuart Armstrong, winger Scott Sinclair and striker Moussa Dembele returning at the expense of Oliver Ntcham, Leigh Griffiths and the injured Jonny Hayes.

Rangers midfielder Ryan Jack failed to recover from a knee injury as attackers Josh Windass and Daniel Candeias returned, with Eduardo Herrera dropping to the bench.

A fifth-minute opportunity for the visitors, when striker Alfredo Morelos’ strike was saved by Gordon, filled the away fans with false hope for the first 45 minutes.

There was a nervousness about the Hoops rearguard, but they were creating chances at the other end as they took control.

Rangers goalkeeper Wes Foderingham saved at close range from Dembele, who had latched on to a Dedryck Boyata knock-down, and winger James Forrest shaved the post moments later from 12 yards.

Foderingham then made a double save, first from a Dembele header then from Sinclair — who had his first attempt blocked by James Tavernier on the line — before Rangers’ experienced Portuguese defender Bruno Alves limped off in the 18th minute to be replaced by David Bates.

Thereafter until half-time it was all Celtic and, just before the interval, Sinclair missed a sitter, sliding an Armstrong cut-back past the post from six yards.

Rangers started the second half as well as they did the first, and Tavernier’s hitch-kick volley from a Candeias cross was brilliantly tipped over the bar by Gordon for a corner which came to nothing.

The match swung from end to end, its blemishes adding to the tension.

Griffiths replaced the ineffective Dembele on the hour mark, by which time the Govan men had wrestled the game back.

In the 68th minute Gordon made an even better save from Morelos’ close-range header after Tavernier had left Sinclair and Armstrong in his wake down the right.

Murty’s men grew further in confidence and yet another terrific Tavernier cross from the right in the 79th minute was headed wide by Morelos with only Gordon to beat and another great chance was gone.

Hoops fans urged their unusually erratic side forward but Rangers remained strong until the end for a deserved point acclaimed by their supporters, most of whom had arrived with trepidation.