Everton pull out all the stops to secure Cenk Tosun transfer 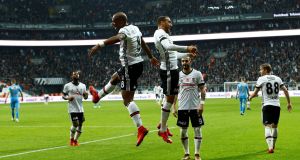 Everton have sent a delegation to Istanbul to complete the signing of Cenk Tosun after Sam Allardyce expressed concern the €28 million deal could be hijacked by a rival European club.

Everton have agreed financial terms with Besiktas for their leading goalscorer and offered the 26-year-old a 4½-year contract to move to Merseyside on January 1st. Tosun bid an emotional farewell to Besiktas supporters after scoring in a Turkish Cup win against Osmanlispor on Thursday and is expected to become Allardyce’s first signing at Goodison Park.

The Everton manager, however, has claimed he is interested in the Germany-born striker plus “many others” as there are several offers for Tosun, who has been previously linked with Roma, Valencia and RB Leipzig among others. Goodison officials, including the director of football Steve Walsh, travelled to Turkey on Friday in an attempt to conclude the deal and fend off competition for the striker’s signature.

“It’s in the wind,” said Allardyce, when asked how close Everton were to completing the transfer. “There’s obviously an interest because we’re actively looking for a frontman but whether we are the ones to complete that deal or not I don’t know. The interest from other clubs around Europe is our biggest worry if we are to secure that transfer.”

A striker and a full back are transfer priorities for the Everton manager next month, although he would also be keen on a reunion with Sevilla’s Steven N’Zonzi providing he can sell a midfielder. “I would take Steven N’Zonzi tomorrow,” Allardyce said. “He is one of my better buys in my lifetime, only €650,000 from France to Blackburn Rovers. Knowing him from that age and knowing him now, yes I would like him but with the amount of midfield players I have at the moment I’d have to move some player out to bring a player like Steven in.

“I would consider every offer and, if it is the right offer, I would recommend to the board that we take it and utilise that money on what we might bring in. I’d have to say that caution is my first priority in this window. For me it would be much wiser that the club tries to get through until the end of the season and readdress what we are about to do during the summer. It is much better operating then than it is in this very difficult window.”

Allardyce conceded, however, that Everton are in urgent need of improvement in the final third. Despite climbing to ninth in the Premier League and remaining unbeaten under their new manager, Everton have scored only 24 goals in 20 league games this season.

“We’re consistently defending well but we’re not attacking very well in possession,” said the manager, who has Wayne Rooney back from illness for the visit to Bournemouth on Saturday but has lost Leighton Baines for an extended period with a calf strain. “I feel the problem is the players’ ability to do the transition correctly.

“When I came in, they played out from the back, played through midfield and when they lost it they lost a goal. When they went into transition they couldn’t defend properly and hence conceded 25 goals in the last eight games before I got here. I think it’s the reverse now. They are defending superbly well but in transition they can’t turn the ball into good passing opportunities and get at the opposition and create more chances.

“I wouldn’t expect that so much against Liverpool and certainly not against Chelsea but I would still say we should have done better with the possession we had. But West Brom was a big concern for me.” – Guardian