Swansea chairman will consider swansong even if club stay up 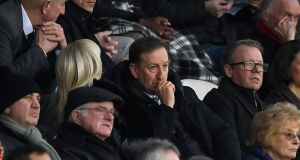 Swansea chairman Huw Jenkins: “My biggest regret is not getting Brendan back here at any cost.” Photograph: Stu Forster/Getty Images

Huw Jenkins has accepted his position as Swansea City chairman will become untenable if the club are relegated and also revealed he will consider standing down even if they manage to retain their Premier League status.

In a wide-ranging interview conducted at his own request amid a backdrop of mounting unrest, personal criticism and growing fears Swansea are heading for the Championship, Jenkins acknowledged he has to take responsibility for the club’s malaise over the past few years.

He described his failure to reappoint Brendan Rodgers as manager 18 months ago as his “biggest regret” as chairman, said he thought Paul Clement should have been sacked sooner and admitted Swansea, who provided a blueprint for others to follow not so long ago, have lost their way to such an extent they have now “become like any other club”.

Speaking at the training ground only 24 hours after Carlos Carvalhal was named as Swansea’s fifth manager in little more than two years, Jenkins also addressed the controversial change of ownership last summer.

He insisted Swansea would be in safe hands if the club were relegated but admitted Steve Kaplan and Jason Levien, the majority shareholders, had not put in any money to pay for signings and revealed the only funds available to Carvalhal in January would come from the profit made from player sales in the summer.

Jenkins, however, is the man many supporters blame for the club’s plight, primarily because of flawed managerial appointments and poor signings. This is the third successive season Swansea, who are five points adrift of safety, find themselves in a relegation battle, and it was put to Jenkins that some fans believe his position is untenable.

Although Jenkins denied he had “taken his eye off the ball” during the takeover negotiations the summer before last, he conceded it was an error of judgment not to bring Rodgers back to the club he had left in 2012 to join Liverpool.

Rodgers was open to a return to Swansea at the time but went on to take the Celtic job. “My biggest regret is not getting Brendan back here at any cost. I’m not going to hide from that,” Jenkins said. “And I told [Brendan] as well a few times. That would have been the biggest thing that we, or I, should have done differently, and that is make sure that at all costs he came back.” – Guardian