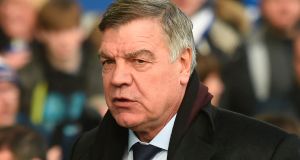 Sam Allardyce: “It’s extremely depressing that a country of this magnitude . . . can allow so many food banks to be operating.” Photograph: Paul Ellis/AFP/Getty

High Street, Manchester, May 25th: the morning after the night Manchester United won the Europa League final against Ajax in Stockholm.

Manchester as a place was caught between red celebration and mourning – there were still police cordons cutting off the cathedral area around the Arena.

Two days before the final, in the name of Isis, a 22-year-old raised in the south of the city, Salman Abedi, murdered 22 people attending a pop concert at the Arena.

It was a serious time. The game in Stockholm had gone ahead despite the bloodshed and reservations in Manchester. There was a minute’s silence before kick-off, once again.

Football does this and football is expected to do this. It is not inappropriate and has been happening for decades – Neville Chamberlain’s return from meeting Hitler in Munich in 1938 was marked by supporters the following Saturday.

In Stockholm, United won. They were on their way back into the Champions League. José Mourinho had taken a gamble to sacrifice the Premier League for Europe.

Meanwhile, St Ann’s Square in Manchester filled and refilled with flowers and 24-hour news cameras. There were candles lit. The Square became the focal point of Manchester’s municipal response. On the night of the match, it was thronged and all you could do was stare.

Early the next morning it was sunny, the flowers were bright, there were lots of people; but St Ann’s was quiet, uneasy.

To get there I’d turned onto High Street and here was another uncomfortable scene, another part of Manchester’s new reality the city wakes up to: homelessness, very public homelessness.

This was not one figure huddled in a doorway, here were people in a row lying on the pavement in sleeping bags as others went to work, coffee in hand, mobiles buzzing. High Street, as its name suggests, is a main thoroughfare.

This grim normality returned over Christmas when a photograph of ‘rough sleepers’ in Manchester city centre appeared as the rest of us were opening presents. It appeared shortly after Sam Allardyce had visited a Liverpool food bank in his capacity as Everton manager and declared the very existence of food banks “a disgrace”.

Allardyce is not everyone’s idea of a philanthropist – in fact, to some, he is the opposite of that – but he hit a nail on the head.

“It’s extremely depressing that a country of this magnitude, and where it thinks it lies in itself, can allow so many food banks to be operating,” he said.

It was a timely howl. Allardyce noted that the North Liverpool food bank he visited is manned by fans of Everton and Liverpool and relies heavily on supporters’ donations and energy. He praised the volunteers but lamented their presence.

This is now ‘a thing’, football and food banks. It is organised, it is supported by ordinary fans, local businesses and football ‘Foundations’ – clubs’ charity arms, which can have tax implications.

Players and managers such as Allardyce are ushered in to raise issues, show sympathy, try to understand. It has become part of modern football.

But should it be?

Or should football just be football?

To an extent, to answer is irrelevant because it is already more than that in some places, such as Merseyside. It is part of the reply to a 30-year shift in society.

Traditionally, football clubs would send their players and management along to visit sick children in hospital at Christmas. It was an act of empathy. Today, football clubs run community programmes which, in part, are feeding people.

It is quite a difference. The former was a gesture, the latter is a structural intervention in society.

And that is not football’s job. That is the role of government, central and local – or it should be. It is not football that should be feeding the population it is simultaneously trying to sell tickets to. At what point does the appropriation of football become inappropriate?

No one is pretending the sport is not a major part of British society but an old question about charity and side-effects has to be asked again; does it reduce a government’s sense of responsibility and does it erode scrutiny of government policy? Theresa May, for one, seems relaxed about food banks.

Today these clubs are corporate enterprises with huge staffs, multi-millionaires on the payroll, outreach departments and, in some cases, offshore registrations. That means, of course, (some) clubs visibly inserting themselves into the ‘heart of the community’ are avoiding the tax which would fund those communities and help end homelessness and the need for food banks.

Manchester is one city in England with a large, ugly problem on its streets. Manchester United, or City cannot be expected to fix it. Sport should be complimentary to society, not the solution to a failed housing policy. And although football fans pitch in to alleviate hardship, they should be free to have their eyes on the ball.

Into Merseyside’s economic cycle steps a £75 million defender. Virgil van Dijk is said to be about to earn £200,000 per week as a Liverpool player, that’s £10.4 million per annum in a city where some people struggle to feed and house themselves.

This is not Van Dijk’s ‘fault’, and as discussed above, it is not his problem to solve. But the rapid escalation in footballers’ pay is indicative of a widening gulf in society that is most often noted in boardroom salaries.

But it is more apparent in football than ever before, and yet we appear to have reached a stage where the reaction to such transfer news is a helpless shrug.

But football needs to be careful. One of the inescapable aspects of watching games this Christmas has been the empty seats. Southampton’s stadium, St Mary’s, is one where that has been prominent – despite the stated attendance figures – and as they sell player after player, that trend is likely to continue.

But the empty seats could also be seen at Manchester City and at United. There is football tourist bonanza to compensate, but if City continue to crush opponents, it will be interesting to see when the sight of empty seats becomes a tipping point.