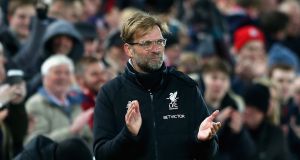 Jurgen Klopp: “We have a good player and we don’t have to sell anybody because of that. So fair play to our owners.” Photograph: Jan Kruger/Getty

Jürgen Klopp dislikes Virgil van Dijk’s €84 million price tag but believes it reflects the reality of modern football at elite level. The Liverpool manager also denied he must sell next month to fund the most expensive defensive transfer in history.

Van Dijk will officially become a Liverpool player on January 1st after the Anfield club met Southampton’s increased valuation of the 26-year-old on Wednesday.

The fee is €17 million more than Liverpool had hoped to pay in the summer and Klopp admitted the figure for Van Dijk is “not nice” and increases pressure on his team. However, he insisted the transfer market has changed beyond recognition in recent windows and Liverpool had to adapt.

“What can I say?” Klopp said of his transfer shift.

“Virgil has a long contract at Southampton. That is how it is. It started a few years ago. If you do not want to do it, do not do it. We had an opportunity to do it and that is why he will be an LFC player. Do I like it? No, because it puts more pressure on everything.

“That is why I said as a Liverpool community we have to ignore it [the price] immediately. He is a player for us, he can improve and he needs to adapt. There are so many things he still needs to work on. He developed a lot in the last few years, made big steps, so it is a good thing.”

He also denied that Van Dijk’s signing represented a statement of intent or would necessitate selling a prized asset in the January window, with Philippe Coutinho courted by Barcelona.

“Nobody told me that, no,” Klopp said when asked if he had to balance the books. “I have no information about that. It’s not to make a statement with a transfer. I don’t really believe in that much. A statement is the quality of our squad in the moment and we still have to improve it. It’s not that it starts from that [£75m], I don’t think so. I was wrong one year ago when we first saw the £100 million thing. Now one year, or one and a half years later, it is completely different.

“When Mohamed Salah came in, people thought it was too much and now they think: ‘Wow, what a catch.’ We can talk about it now, and I really respect it about the price, but really I have pretty much forgotten it already. It’s done and it’s not important for us as a Liverpool family.

“We have a good player and we don’t have to sell anybody because of that. So fair play to our owners that they are ambitious and now we have to use the team to grow together again.”

Meanwhile, Klopp has praised the courage of Rhian Brewster for speaking out about racial abuse and expressed his hopes that the people at the top of the sport will listen to the 17-year-old Liverpool player and realise more needs to be done in the fight against racism.

Klopp said he could “100 per cent understand” Brewster’s frustration that Uefa, in particular, was not doing enough after the teenager decided to go public in the hope that it might prompt the football authorities to take the problem more seriously.

Brewster, one of the key players when England won the Under-17 World Cup in October, chronicled seven incidents, including five since May, when he says he has been racially abused during matches against players from abroad or witnessed the same happening to a team-mate. Two of the alleged incidents happened while playing for England, including one in the World Cup final when he says his team mate Morgan Gibbs-White was called a “monkey” by a Spain player. – Guardian

1 Georgia and Fiji in line to join Six Nations sides in eight-team tournament
2 Obafemi has final say as Southampton stall Man United’s run of wins
3 Andy Moran on moving on from a Mayo career that glowed golden to the end
4 Malachy Clerkin: Sleep well Jack, you made us all happy
5 Dave Hannigan: Notre Dame’s Fighting Irish leprechaun needs its ass kicked
Real news has value SUBSCRIBE