Celtic have not hit the heights of last season, while Rangers remain unconvincing 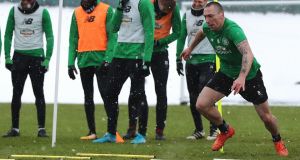 It is difficult to determine what represents Old Firm normality. Memories of the pair jousting for titles – meaning fixtures between Celtic and Rangers were themselves crucial to the destination of trophies – are offset by long periods of single-club domination.

The only serious debate that should exist now as relating to Celtic’s current superiority in Scotland is whether the gulf to the rest of the country is greater than it has ever been. There is also the question of competitive context: when Celtic marched to nine titles in a row from 1966 to 1974, other Scottish clubs were capable of making inroads in Europe.

This season, Rangers were bundled out of the Europa League by a team from Luxembourg. Rangers head for Celtic Park at lunchtime on Saturday for a derby in which the saving of face has never been more important – for either side.

Brendan Rodgers rightly rails against any suggestion of boredom setting in at Celtic. Nonetheless, and notwithstanding a fine first-half performance, the second period of the victory against Dundee on Tuesday was so timid as to be almost unwatchable. There should, at least, be a fevered backdrop for the second Old Firm match of the season and the Glasgow duo’s last fixture before a winter shutdown.

That Celtic have not hit the heights of last season is a widely held and fair analysis. Still, after a hectic opening to the season Celtic are eight points clear at the top of the table. Key for Rodgers is whether the significant lift in performance level by a number of his players last season was the fulfilling of potential or a short-term situation.

For now, Rodgers is of a mind to defend his squad. “We actually play our 38th game which, up here and down south, is a season, and we are doing it within half a season,” the Northern Irish man said. “This will be my 97th game as Celtic manager. I had 96 games as the manager of Swansea and I was there a couple of seasons. I have been here a lot less than that, so it just shows you the number of games we have been playing. But it all points to having great success and that’s what we want. This will be the last game of what has been an incredible year for us.”

Rodgers is likely to turn once again to Moussa Dembélé, the French striker who has previously excelled against Rangers but has had a low-key season thus far. There is a growing belief that Dembélé will be coaxed to England during the January transfer window, so a stirring derby performance could raise the price tag and provide a fitting farewell.

Rangers have nobody else to blame for their current unconvincing scenario. Finally, the realisation has dawned on them that chairman Dave King’s grand plans and promises on sweeping to power in 2014 may not amount to more than noise. King can at least absolve himself from blame for the woeful – and relatively expensive – recruitment drive of last summer, which has failed to improve on-field matters.

Graeme Murty admitted he was “staggered” to be appointed as the Ibrox club’s manager until the end of the season, and no wonder. Murty is not yet qualified to manage Rangers and earlier gave the clear impression that doing so would prove too much of a burden anyway.

Owing to board indecision and the embarrassing failure to coax Derek McInnes from Aberdeen, Rangers find themselves providing a high-profile training scheme for Murty.

Director of football Mark Allen publicly insisted he had provided a shortlist of managerial candidates to the Rangers board within two days of Pedro Caixinha’s sacking in October. It says little for Allen or his role that no external appointment was duly made.

The good news for Murty – wins against Aberdeen and Hibernian – has been undermined by a string of dismal defeats, last weekend’s against Kilmarnock a case in point.

Still, in pointing to the lack of depth of quality in Scotland’s top flight, Rangers find themselves a clear third in the league and within three points of second. “We’ve looked at everybody who’s played against Celtic recently and where they’ve had success and where they have found problems,” Murty said.

Therein lies an element of Rangers hope: Hearts mauled Celtic 4-0 in Edinburgh in mid-December, albeit the champions have responded with three victories while not conceding a goal. – Guardian