Mourinho must ‘learn to cope’ with being outspent, says Wenger 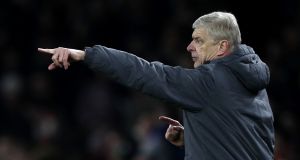 Arsenal manager Arsène Wenger: “There is always one team, sometimes four, who were richer than I was, so I learned to cope with that and to deal with that.” Photograph: Adrian Dennis/AFP/Getty Images

Arsène Wenger has told José Mourinho that he has spent the duration of his 21 years at Arsenal as a poor relation of the Premier League’s financial elite.

Mourinho said on St Stephen’s Day that his lavish spend on players since he took charge at Manchester United in the summer of last year – which stands at £261 million (€294 million) – was not enough to level the playing field with Manchester City.

Wenger smiled broadly at his old rival’s plea of poverty and he said that a manager simply had to find other ways to close the gap. “I have been in that position for 21 years so I will not start to complain now,” Wenger said. “There is always one team, sometimes four, who were richer than I was, so I learned to cope with that and to deal with that.

Wenger will equal Alex Ferguson’s record for most games as a Premier League manager when Arsenal take on Crystal Palace on Thursday.

Wenger did not rule out making a new signing in January, although he anticipated that he would be busier fielding enquiries about his fringe players. Calum Chambers is one that he would consider loaning out. “I will be busy, yes, because first of all you have clubs that call you to get players on loan or to buy your players,” Wenger said. “As well, I’m open-minded to any possibility to strengthen our team.”

Wenger said that he would sit down with Jack Wilshere to discuss the possibility of a new contract for the midfielder. Wilshere, who has six months to run on his deal, has taken advantage of Aaron Ramsey’s hamstring injury to force his way back into Wenger’s preferred lineup in the league. “I believe that if we can meet a point of agreement financially, he will want to stay,” Wenger said.

Wenger also reiterated that he expected Alexis Sánchez – who remains a target for Manchester City – to stay for the second half of the season and see out the final months on his contract. Sánchez has made it plain that he will not re-sign at Arsenal while Mesut Özil, who is in the same contractual position, is of a similar mind. Özil stands to be in the shop window as a free agent at the World Cup finals with Germany next summer.

“Honestly, no, we have not been approached by anyone,” Wenger said, with reference to Sánchez. “I’ll just stick to what I said before on him.” – Guardian