Roma captain often rotated but was majestic against Barcelona 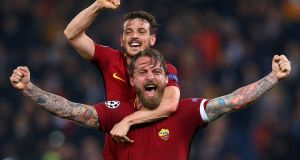 Daniele De Rossi has waited a whole career to be part of a European night at Anfield. He was 18 the last time Roma played away to Liverpool, back in March 2002, newly promoted from the academy and with a handful of cup games for the senior team under his belt. This was not yet the time for the manager, Fabio Capello, to put his faith in precocious talent.

Roma lost 2-0 and exited the Champions League. De Rossi went on to become one of the club’s most beloved stars. Before long fans were calling him Capitan Futuro – the Future Captain – destined to follow in Francesco Totti’s footsteps as the latest homegrown player to wear the armband.

They were right, in the end, though few could have guessed that the transition would get pushed back all the way to 2017. It almost did not happen at all. There was a point, as negotiations over a contract renewal stalled last year, when De Rossi thought about seeking new experiences elsewhere.

“In my own head I was playing out my last season,” he told the newspaper Corriere dello Sport in September. “The best offer that came in was from an Italian club but that didn’t get my juices flowing: I didn’t want to betray this city and these fans.

“If an offer had come in from a European club or an American one – it’s no secret that it’s a dream of mine to have an experience of life and football over there – then probably we would not be here talking today.”

Then again, who knows? De Rossi has had opportunities to leave before, and at times came close to accepting, but in the end his team and his city pulled him back in. His desires, like those of most human beings, contradict one another at times.

As a boy he would watch tapes of Boca Juniors against River Plate at La Bombonera and fantasise about playing there. Yet he has always found great satisfaction in representing his hometown club. If he had not become a footballer, he remains convinced that he would have spent his weekends driving up and down Italy to watch Roma.

Perhaps a night such as the one on Tuesday offers the best of both worlds. You can be sure that the Kop stirs the imagination of a man who named Steven Gerrard as his idol and the player he would select to captain his ideal XI.

Not that De Rossi appears uncomfortable in that role. He has played less this season under Eusebio Di Francesco, granted more opportunities to rest in a midfield whose depth was enhanced over the summer by the signing of Maxime Gonalons from Lyon and the return of Lorenzo Pellegrini from Sassuolo. That freshness has served him in the biggest games.

He was majestic in the quarter-final second leg against Barcelona, setting up Edin Dzeko’s sixth-minute opener, converting the penalty for Roma’s second and dictating the terms of engagement. De Rossi played more passes than his midfield team-mates Kevin Strootman and Radja Nainggolan combined, almost always moving the ball forwards, and never losing possession.

Before kick-off he had stood in front of his team-mates in the Stadio Olimpico changing room and asked why they should not overturn a three-goal deficit against La Liga’s runaway leaders. “The fans think we can do it,” he observed. “So why not? Why should we stand here and shit ourselves?”

There have been times when De Rossi might have struggled to feel such faith in himself, let alone project it to a whole team. From late 2015 into 2016 he suffered a series of niggling injuries that ate away at him mentally as well as physically. Even when he was on the pitch, his standard of play declined.

“I started to lose the conviction that my body could handle the demands of Italian and European football at a certain level,” he confessed during a wide-ranging interview with the magazine Rivista Undici last summer. “I’m not a player like [LIONEL]Messi . . . I’m not one of those who can carry a result home on my own when I’m in form or make the difference even when I’m not. I need to be doing well physically to play my game but I also need a team who support me. I’m a cog [IN A MACHINE].”

It was the combined coaching prowess of Luciano Spalletti and Antonio Conte, in De Rossi’s opinion, that turned things round. The former returned to Roma in early 2016 and through his past familiarity with the player put him back in the right places and with mechanisms to succeed. The latter did what he has always done best, engaging the midfielder’s competitive spirit with Italy.

“He electrified me,” De Rossi said of the man who is now Chelsea manager. “I’ve said it many times over: he really struck me.”

The feeling is mutual, Conte speaking in glowing terms about the Roma captain before their teams clashed at Stamford Bridge in October. It was Capello, though, who paid De Rossi what might have been the most eloquent tribute of all, observing during one interview that “you cannot buy personality at the supermarket”.

It takes a certain character just to survive for 16 years at Roma, where the media spotlight is never set to anything less than full glare. De Rossi has lived for much of his career in the centre of town, too, hiding in plain sight amid the tourists. Maybe one day he will take their lead, setting off to find somewhere new to explore. For now a Champions League semi-final will have to do.