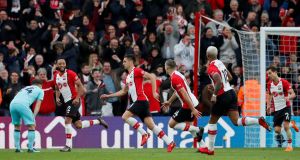 Struggling Saints had not won in the top flight at St Mary’s since November but the recalled Tadic changed that with a goal in either half to end a nine-game winless league run.

Bournemouth had briefly threatened to damage their near neighbours’ safety hopes when Josh King levelled in first-half added time.

Saints boss Mark Hughes was searching for his first league win at the fifth attempt following his appointment last month.

The Welshman accepted in the build-up to the game that it was a must-win fixture in the battle for to beat the drop and his response to the pressure was to recall creative duo Tadic and Nathan Redmond following last weekend’s FA Cup semi-final defeat to Chelsea.

Saints’ home support have been starved of success and entertainment this season but the whole ground was lifted by the opener and Charlie Austin and Lemina each tested Begovic as they went in search of a second.

Striker Austin then had a half-hearted penalty appeal waved away by referee Anthony Taylor before Bournemouth dampened the mood with an equaliser in first-half added time.

The visitors had created little up to that point but, minutes after Nathan Ake was denied by the legs of Alex McCarthy, they made the most of another corner as Ryan Fraser’s delivery was flicked on by a combination of Steve Cook and Simon Francis for the unmarked King to volley home at the back post.

Ahead of kick-off, Cherries boss Eddie Howe urged his players to concentrate on securing their own top-flight status rather than attempting to inflict further misery on their hosts.

A first victory at Southampton on their 14th visit would have made that mathematically certain but they fell behind again nine minutes into the second period.

Cherries defender Cook made a mess of McCarthy’s long kick and Tadic collected the ball, drove forward and expertly found the bottom left corner from 20 yards.

Matt Phillips gave West Brom a glimmer of hope in their fight for Premier League survival as they won 1-0 at Newcastle to extend their unbeaten run to four games.

Phillips’ 29th-minute strike handed caretaker boss Darren Moore a second victory of his brief reign as the Magpies came up short in their hunt for a fifth straight home win in front of a disappointed crowd of 52,283 at St James’ Park.

It was no more than the visitors deserved as they created the better chances on an afternoon when they knew even three points might not be enough to keep them in the top flight.

Rafael Benitez’s men huffed and puffed, but simply could not find the quality, organisation or precision which brought them four successive victories to end their own relegation fears, although keeper Ben Foster made a superb first-half save to deny Dwight Gayle an equaliser.

Brighton & Hove Albion edged closer to survival after their first clean sheet in 14 Premier League games earned them a hard-fought 0-0 draw at Burnley on Saturday.

Both sides had plenty to play for, with Burnley on the verge of qualifying for next season’s Europa League, and the home side almost took the lead when Kevin Long just failed to force the ball home after an almighty goalmouth scramble.

With Burnley struggling to score at home and Brighton away, goals were unlikely to flow, although visiting keeper Mat Ryan had to keep out first-half efforts from Ashley Barnes and Berg Gudmundsson.

Brighton started positively after the break when Burnley replaced injured Chris Wood with Sam Vokes, who almost scored with his first touch. The visitors held on for a welcome point although they have not won in six league games and face a tough run-in with games against both Manchester clubs and Liverpool.

Cenk Tosun and Idrissa Gueye scored in either half as Everton piled the pressure back on relegation battlers Huddersfield with a 2-0 win at the John Smith’s Stadium.

It was a damaging defeat for Huddersfield, whose victory over Watford in their last match had given their survival hopes a big lift.

A seventh home loss of the season, though, coupled with wins for relegation rivals Crystal Palace, Southampton and West Brom, has left David Wagner’s side three points above the drop zone.

Everton have now lost only one of their last seven games, winning four, but their travelling fans made clear their displeasure at the continued presence of Sam Allardyce in their dugout.