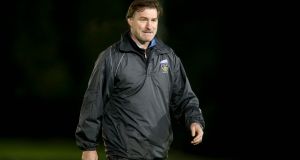 Aaron Callaghan says he will appeal the six-month ban from all football-related activities imposed on him by the FAI for behaving in what is said to have been an “offensive and intimidating” manner towards the match officials involved in Athlone Town’s recent 7-0 defeat by Wexford.

Callaghan was serving a two-match suspension at the time and should not have been in the dressing-room area after the game. The 51-year-old, who previously had spells in charge of UCD and Bohemians, resigned as Athlone’s manager this week, citing the club’s failure to provide warm-up gear and a physiotherapist for Monday’s Leinster Senior Cup game against Shelbourne as “the final straw”.

In its statement, expressing regret over the departure, Athlone suggested that Callaghan had gone for “personal reasons”. Terry Butler will be in charge for the game against Galway United, when the home side will be hoping to avoid yet another league defeat. The club lost 4-1 in Galway on the opening night of the season but has conceded more goals than that on four occasions since and picked up just one point.

Dan Cleary is a doubt for Dundalk as they head to Waterford in the Premier League. The young centre-back has been outstanding for Stephen Kenny’s side this season but picked up a hamstring problem in the 5-0 defeat of St Patrick’s Athletic. Karolis Chvedukis is definitely out again.

The hosts have Gavan Holohan and David Webster back from suspension, John Kavanagh and Stanley Aborah out injured, and doubts about Kenny Browne and Derek Daly.

If Waterford lose, Derry could overtake them in the table by beating Bray away, while St Patrick’s would draw level on points with Shamrock Rovers if they can beat their Dublin rivals in Inchicore.