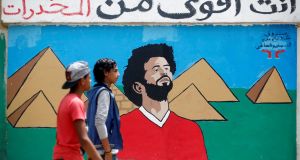 Egyptian youths walk in front of a picture of Liverpool forward Mohamed Salah with background of Great Pyramids, in Cairo. Arabic words read “You are stronger than drugs”. Photo: Amr Abdallah Dalsh/Reuters

In a coffee-house down a Cairo sidestreet, the Roma v Liverpool game almost starts with a row among the customers. The previous game on the television featuring the local favourites Zamalek risked running into extra time, past kick-off for the Champions League tie. A Zamalek goal in the 89th minute saved any blows: No one wants to miss Mohamed Salah.

“He plays in a beautiful way – and he’s always developing,” says Mohammed Hassen, a 23-year-old originally from Sudan but raised in Egypt. “He brings pride to people as he’s a Muslim who’s made it in the top leagues. He brings pride to all Arabs,” he adds.

Salah has rapidly reached demi-god level in Egypt because of his performances at Liverpool. His status quickly rose beyond the boundaries of sport, cementing him as a symbol of Egyptian potential and hope even amid a gloomy period for Egypt, with a troubled economy and few outlets for free expression.

It is unknown for 50 people to sit in near silence in Cairo, but it seems the Liverpool forward’s presence on screen can achieve that too. They sit quietly, brows furrowed, faces turned upwards towards the screen, the silence broken only by the match commentary and the sound of the ceiling fans hitting the striped canvas that functions as a makeshift roof. Extra chairs are brought in, cigarettes are lit, coffees and sodas are laid out, coals for shisha pipes are heated.

Anyone listening hard to the commentary would also be forgiven for thinking that Salah plays in every position, given that the announcers are prone to describing his actions even when he’s nowhere near the ball. At one point, the beIN commentator brands him “Egypt’s new Ramses” and adds that Liverpool should be renamed “Salah-pool”.

Twenty minutes into the game, and the tiny alleyway that functions as the coffeehouse is packed – everyone is tense, awaiting a Salah goal. “For God’s sake, give it to Salah,” one man grumbles in frustration.

The cafe erupts into cheers for Liverpool’s two early goals (Sadio Mané and Georginio Wijnaldum) but these barely come close to the claps and cheers that come when Salah takes possession of the ball, or is anywhere close to the goal.

At the end of the first half, the mood shifts: the patrons no longer want to see Salah score to aide Liverpool, they need to see what he can do to reassure them that their upcoming foray into the World Cup will be a success. Egypt qualified for the first time since 1990, after Salah scored a penalty in the 95th minute against Congo.

“I really identify with him – he put in a lot of effort to get where he is,” says Ahmed Said, 21, who skipped work to race to the coffee-house for the second half. Said says he stopped watching football after the 2012 Port Said stadium massacre, which killed 74 football fans, but Salah’s presence convinced him to start watching again. “I’ll watch the World Cup because of him,” he says, sucking on a shisha pipe decorated with Manchester City’s crest.

When the match passes without a Salah goal, Said quickly finds a reason. “Salah’s performance wasn’t so great as he’s just under so much pressure,” he explains. “He has all those problems with his sponsor,” he adds, referring to a week of tension between the 25-year-old forward, who has a personal sponsorship deal with one mobile phone company, and the Egyptian Football Association, who used the player’s image to promote a different, government-owned telephone company.

“Unfortunately the way they dealt with us is very insulting … I was hoping the treatment would be more decent than this,” Salah later tweeted. Egypt’s minister for sport stepped in and pledged to end the dispute.

Liverpool will head to the Champion’s League final on May 26th against Real Madrid, a conflicting moment for many in the Middle East, where La Liga has long dominated screens. But not so for Hassen, who confesses that even though he’s a long-time Real Madrid fan, he will cheer for Liverpool because of Salah. “The game’s finished for Real Madrid,” he says, smiling. – Guardian service