Eric Bailly dropped because he is not going to World Cup, says Mourinho 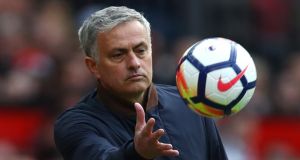 Jose Mourinho has revealed why Eric Bailly has been frozen out of the Manchester United first team in the last few weeks – it is because Ivory Coast have not qualified for the World Cup.

Alternatively, to put it in a more logical way, Mourinho feels honour-bound to give his other four central defenders the chance to shine, as Phil Jones, Chris Smalling, Marcos Rojo and Victor Lindelöf are all striving to impress their national coaches to win a place in squads for Russia.

Bailly has not played for United since the Manchester derby a month ago but Mourinho denied reports of a rift or possible sale. “There is no situation, Eric is fine,” the United manager said.

“In all honesty my work is not about the World Cup and preparing players for their national teams. I try to be a good team manager and that means being a little bit cold and selfish at times, but I am not as bad as all that and I still have space for a little bit of feeling. If I have to make an emotional choice then Eric is the one I am not going to help. The other four are all fighting for a place.”

United are at Brighton on Friday night with the home side knowing a victory would make survival mathematically certain, though Mourinho believes Chris Hughton has already done enough to keep his side up. “Chris has done a very good job and all he needs to turn that into an amazing job is for safety to be mathematically confirmed,” he said. “Personally, I think Brighton have enough points already.”

Mourinho is upbeat about Romelu Lukaku’s chances of being fit for the FA Cup final and Marouane Fellaini signing a new deal at Manchester United.

Lukaku limped off against Arsenal last weekend with an ankle complaint and is recovering back in Belgium, where he was filmed moving freely in a medicine ball exercise on Thursday.

Those images suggest the 24-year-old’s injury is not as bad as first feared, with Mourinho confirming the striker should be able to play against Chelsea in the FA Cup final on May 19th.

“I don’t know [how he is],” Mourinho said. “I just know that, of course, [he is] not [available] tomorrow. Apart from that, we need to wait for more scans, more time but not tomorrow.”

Asked if there was a chance for the FA Cup final, Mourinho added: “Hope so. Looks positive.”

Mourinho is also hopeful about last weekend’s match-winner Fellaini staying at Old Trafford beyond the summer.

Contract talks with the 30-year-old midfielder have been at an impasse throughout the season, but the United manager still believes he will stay put amid interest from some European giants and the Chinese Super League.

“In Marouane’s case, destiny is in his hands and he will decide what makes him happier. He knows that I want him to stay, he knows that the club wants him to stay. He has an offer from us and it’s up to him now to [say] yes or no.