Madrid battered by Bayern but hauled themselves through 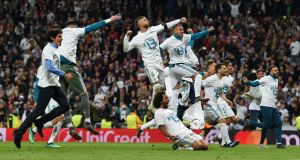 Real Madrid tried so hard to lose this semi-final. Bayern Munich tried so hard to win it. That neither could achieve this apparently shared aim speaks in the first place to Real’s pure champion will and secondly to that nexus of game-management, calamitous Bayern defending and something close to a kind of white-shirted voodoo, the ability to win even while in the process of sputtering and panting like a stalled presidential motorcade.

This was a fun, wild, oddly drunken game of football that ended 2-2 at the Bernabéu and 4-3 to Real on aggregate. At the end of which a couple of things seemed clear. Above all this was just a brilliant game. These late-stage encounters are supposed to unwind like a game of chess, a matter of grudging details. This was a more like a seasick game of quoits on the deck of a rum-sodden pirate ship, 95 minutes of half-chances, howlers and defending that seemed to have come undone at the seams like a soggy envelope.

This leads on to point two, the ongoing, perhaps misguided conviction that somebody somewhere is finally going to connect in a decisive way with that elegantly presented champion’s glass jaw. Liverpool or Roma will travel to Kiev later this month with a chance to stop Real from making it three in a row. With this in mind Bayern might just have offered an anatomy of how to go about doing it, with a performance that will be picked apart and pored over with interest by either Jürgen Klopp or Eusebio Di Francesco over the next few weeks.

For long periods in the second half Bayern were heroic. They thrashed Real 2-2, battered them to a score draw, steamrollered their own way right out of the competition. Albeit at times it was as though Real were actively trying to concede goals, with Thomas Müller left unmarked for pretty much the whole of the second half, constantly hollering for the ball in another traumatically wide open green space while Marcelo ambled back wearing a look of mild curiosity.

With the final kick of the game, and with Bayern a kick from the final, Müller eventually got that cross from the left and launched himself, missing by a toenail. As the whistle blew there were spent, crumpled bodies across the turf. Bayern had 22 shots at goal to Real’s nine. They hogged the ball. They reduced Cristiano Ronaldo to 13 completed passes. But for a frankly bonkers error by Sven Ulreich, Jupp Heynckes would now be preparing for a swansong final.

Instead Ulreich came up with something genuinely strange, seeming to stop and then simply lie down on the turf as the ball bobbled towards him, a man overcome with weariness, allowing Karim Benzema to score his second of the game.

Whoever their opponents later this month Real’s weaknesses here seemed to tessellate intriguingly with the attacking strengths of both Liverpool and Roma. The most telling was the constant weakness Bayern found on the flanks. David Alaba’s willingness to attack the temporary right-back Lucas Vázquez had Real looking at times like a three-legged dog of a team, always listing to one side, exposing a lack of cover for the full-backs.

The ball fell the wrong way three or four times. Alaba drove outside where Sadio Mané or Mo Salah can be expected to hare infield. And both Bayern goals came from surges out wide, the second after fine work from the excellent Niklas Süle and a cross that James Rodríguez put away before producing a laughably prim no-celebration-celebration right in front of the delirious away fans.

Similarly Bayern only really struggled when they let their high press drop, when Real were able to build and maintain pressure, allowing that high-grade but far from youthful attack to find space. Real lack a little pace these days without Gareth Bale on the pitch. It is possible with a little luck to play a bold high line, to press with the throttle to the floor, as both Liverpool and Roma do at times.

Real will be favourites whoever they face but there will still be hope in the familiar sense of brittleness on show here. Should they make it to Kiev, Liverpool will surely look to play with a high-pressing sense of risk, to do as much as possible in their own full-throttle red zone against opponents who can look vulnerable and oddly invincible at the same time, and who were winners once again by some shakily enacted divine regal right. – Guardian service

1 Waterford turn Kilkenny upside down and inside out
2 Sordid murder of hurling brothers still resonates in south Galway
3 Waterford’s frenzied waves of attacks too much for Kilkenny
4 Ireland’s work-ons: Four things Andy Farrell needs to address
5 Jim McGuinness: There is a way to save championship and make it competitive
Real news has value SUBSCRIBE