Spanish press reaction: ‘Liverpool will be crushed by Real’s legend’ 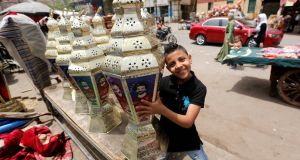 An Egyptian boy carries the traditional decorative lanterns known as “Fanous” bearing the image of Liverpool’s Egyptian player Mohamed Salah at a market in Cairo before the beginning of the holy fasting month of Ramadan. Photograph: Amr Abdallah Dalsh/Reuters

And so, it is a repeat of the 1981 European Cup final between Liverpool and Real Madrid, only there is virtually no way this will be a repeat of that.

Watch it back and it is awful: a dirty, disjointed game of barely any passes, even fewer chances and pretty much no football, played on a pitch that was embarrassingly bad. It finished 1-0 when the Liverpool left back Alan Kennedy scored the only goal. It is hard to imagine that being repeated this time round: these two teams survived semi-finals that finished 7-6 and 4-3.

In the pages of Marca, five journalists gave their verdict on the question: “Are Madrid favourites?” Four said yes; the one that said no, perhaps because someone had to, offered inexperience as a quality. “No one in the Liverpool team has lifted the cup, which is motivation,” Samuel Garcia wrote.

Marca reports on “the goal machine” that will face Madrid but, while there is little doubt that Liverpool have done something special, that does not necessarily mean they win the Champions League. Most in Spain think they will not – and all the more so after Wednesday night in Rome.

The Catalan sports daily El Mundo Deportivo led on “Hero Klopp”, and they cling to him, but for them to really embrace him he must beat Madrid. “Liverpool are finalists but they sow doubts,” ran the headline in Sport. Not least because Madrid are, well, Madrid. And, according to Guillem Balague in AS, there is something familiar about them. “Liverpool score before games have been defined,” he wrote. “It turns out that RM do just the same.”

Julian Ruiz in El Mundo said: “It’s hard for Madrid fans to know if they can beat Liverpool. But I’m an optimistic realist and I think Madrid are virtual winners already. Why? Because Liverpool will be crushed by Madrid’s legend. Beating them is like beating the Invincibles, although Klopp thinks Zidane’s Madrid is a giant with feet of clay and there’s some sense in that.”

Ismael Monzon wrote in the same newspaper: “When four long-haired lads got together to play in rough gaffs in Liverpool, someone saw them and said: ‘These guys have talent.’ Half a century later, Jürgen Klopp, aware that no one likes rigidity and conformity in the city, did the same. He let them strum their guitars and go out and play with the brakes off.

“It’s curious that this band is dominated by one of the best orchestra directors in international football and that the fifth Beatle – the irony of globalisation – is an Egyptian called Mohamed. But Salah wasn’t the executioner of his former team this time; he let the Mane be the soloist.”

At the other end, though, it is a different story. “They say that defence is the best attack and the old adage reflects the state of things in this unbalanced Liverpool team,” wrote Diego Torres in El Pais. “Klopp’s greatest achievement has been building a super-competitive team with a second-rate defence and a limited midfield made up of serious, professional players but with no class and little invention.

“Surprisingly it was enough, because every time the ball flew into Karius’s area, the alarm bells rang. The team that challenges Madrid in Kiev travels with a reckless defence. The final in Kiev looks like being the most unequal in a decade.” – Guardian service