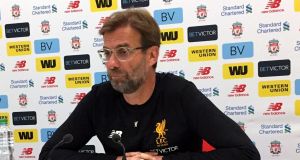 Liverpool manager Jürgen Klopp wears a tricolour Liverbird in support of injured fan Seán Cox. “All our thoughts and prayers at this moment are with Seán and his family.” Photograph: Carl Markham/PA Wire

Jürgen Klopp has appealed for “responsibility from everyone” at next Wednesday’s Champions League semi-final in Rome amid concerns over security and the attack that critically injured a Liverpool supporter outside Anfield.

A Liverpool delegation met officials from Uefa, Roma and the Italian authorities in Rome on Friday and said important progress had been made on a range of security and safety issues for the 5,000 travelling fans. The club had several concerns and these were heightened by the assault on 53-year-old Seán Cox before the first leg on Tuesday. Two Roma fans are due to appear in court on May 24th in connection with the attack.

The Liverpool manager said he was at a loss to comprehend the violence that, along with the season-ending injury to Alex Oxlade-Chamberlain, had tarnished his team’s 5-2 victory at Anfield. He urged everyone involved in the second leg – Liverpool’s supporters, Roma fans and the authorities – to ensure the second leg makes headlines for the right reasons.

“It is only football, only football,” said Klopp. “I never understood people who did not understand that fact. I never my whole life thought it is nice that they have a fight next to a stadium or whatever. I am pretty sure everyone who is involved in keeping all people there safe that they do their best, and in a modern world it will be possible. I am not too concerned about that but I really ask for responsibility from everyone.”

Merseyside police have confirmed fans will be refused entry to the Stadio Olimpico if the name on their ticket does not correspond with that on their passport.

Klopp wore an Irish tricolour Liverbird at his press conference on Friday in tribute to Mr Cox, who is from Dunboyne in Co Meath. The father of three remains in an induced coma following brain surgery. Klopp added: “Tuesday showed the beauty of the game during the game and showed its most ugly face before the game. I cannot describe my emotions in English still. It should never have happened and we all have to do everything to make sure things like that will not happen anymore.

“I obviously don’t have the solution for it, probably no one has that, but it is unbelievable that something like this can happen. As you can imagine all our thoughts and prayers at this moment are with Seán and his family.”

Klopp made a striking vow to Oxlade-Chamberlain as the Liverpool midfielder begins a lengthy recovery from serious ligament damage.

“I cannot believe that this wonderful player and person in such a positive situation helping the team, making such a clear challenge, had this happen to him,” Klopp said. “It’s not fair but that’s how life is sometimes. They say you get a lemon, make lemonade out of it and that’s what we have to do. I’ve told him we will wait for him like a good wife when a man is in prison.”