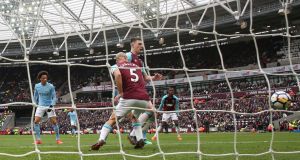 The locals were pouring away from this arena long before the final whistle, with West Ham’s Premier League status feeling ever more precarious. The gap from the bottom three has been shaved to an unnerving three points over the weekend and while there is no disgrace in losing to the champions, the manner in which Manchester City sauntered to this thrashing was disturbing. The near silence in the stands was significant.

This actually felt like an escape given how many opportunities were created but passed up by Pep Guardiola’s side. City virtually declared in the latter stages with Yaya Touré strolling around central midfield and the teenage England youth international, Lukas Nmecha, leading the line on his league debut, for all that the ball still rarely left the home side’s half. West Ham, chasing shadows for all but a brief period ahead of the interval, had been pummelled into submission. David Moyes must somehow raise spirits for next weekend’s trip to Leicester, otherwise this season could have a sting in its tail.

It was the kind of masterclass City tend to impose in this arena. Last season they had prospered 4-0 and 5-0 here, playing on West Ham’s insecurities and relishing the wide open spaces on offer. They should have rattled up a similar tally in the opening half-hour, so dominant were they tearing into jittery opponents. Ilkay Gündogan was close to converting Raheem Sterling early centre, though the home side had yet to enjoy any meaningful touches of the ball by the time Leroy Sané collected just outside the corner of the penalty area. Aaron Cresswell was reluctant to engage, allowing the German to cut in on his left foot and whip a shot which cannoned from Patrice Evra’s forehead to nestle in the far corner. Adrian, in for the ineligible Joe Hart, had been utterly wrong-footed by the deflection.

Other opportunities were passed up before City inevitably celebrated a century of league goals, albeit with a reward utterly at odds with the beauty of so many of their tally this season. Adrian had actually done well to stifle Sterling’s run just outside his penalty area, but the visitors simply kept coming. The England forward’s follow-up was blocked by Angelo Ogbonna, but Gündogan calmly found Kevin de Bruyne on the overlap with the Belgian’s cross flicking off Adrian’s fingertips to bounce in off Declan Rice and Pablo Zabaleta. The Argentinean spent nine years at City, but he took no joy in registering their ton.

This had always felt a rout in waiting. West Ham are the division’s most porous defence and had been becalmed, sitting deep and permitting City their possession when other teams have shown in recent times that a more aggressive and smothering approach can yield reward against the champions. Perhaps Moyes determined his side lack the dynamism to swam into such a press, though they did muster a brief rally once the visitors, maybe overly confident in their advantage or possibly merely losing interest at the lack of a contest, allowed their upbeat tempo to drift just before the break.

Marko Arnautovic was incensed to be penalised for a foul on Ederson which ruled out his tap into an empty net, but that at least woke up the home support with his team-mates rejuvenated even to have come relatively close. Within minutes, Gündogan had tripped Edimilson Fernandes just inside the box only for the officials to award a free-kick two yards outside it. That felt a significant oversight, only for Cresswell to belt the set-piece inside the goalkeeper’s near-post and apparently gain the home side their foothold.

Except, of course, it actually only served to sting the visitors into a response. The majesty of their third goal took the breath away, from Gabriel Jesus’ wonderfully weighted and incisive pass which sent Sterling scurrying beyond Cresswell, to the winger’s clarity of thought as he contemplated his centre while West Ham flooded their penalty area. In darted Jesus unnoticed to collect from Sterling with a glorious first touch, disorientating Zabaleta in the process, then convert beyond Adrian from close range. It was the 15th time West Ham had conceded at least three goals in a league game this season.

There was no stemming the tide from then on in. Sterling should have been awarded a penalty as Cresswell slid in, then was denied by Adrian, before turning provider again. Fernandinho had reclaimed the ball from Manuel Lanzini before liberating the winger yet again down the right, with Sterling again able to await reinforcements before finding the Brazilian with the return. The finish was crisp with the goalkeeper hopelessly exposed for goal number 102 of this term. West Ham, battered and bruised by it all, must have felt most had been plundered at their expense by the end.