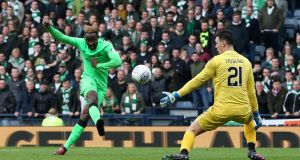 A second-half double by substitute Moussa Dembele gave Celtic a 4-2 win over Hibernian at Hampden Park and booked their place in the Betfred Cup final.

Brendan Rodgers’s side had returned chastened from their 3-0 Champions League defeat by Bayern Munich in Germany on Wednesday, but even far from their best they appeared to have the semi-final won by half-time after two strikes by right back Mikael Lustig.

Former Celt Anthony Stokes reduced the deficit just before the hour mark from the penalty spot before Dembele came on and restored Celtic’s two-goal lead.

And although 19-year-old Oliver Shaw made it 3-2 moments after coming off the bench for Neil Lennon’s side, the French striker grabbed a late fourth.

The champions extended their unbeaten domestic run to 60 games to set up a final meeting with either Rangers or Motherwell who play on Sunday.

Celtic’s opener came in the 14th minute after Hibs failed to clear their lines after initially dealing with a Leigh Griffiths free-kick.

When Stuart Armstrong’s cross from the left was headed on by Hoops defender Dedryck Boyata, Lustig escaped the sleeping Brandon Barker to knock the ball past Ross Laidlaw without any great pace.

If Laidlaw looked unconvincing at Lustig’s first goal – and he did with a poor attempt to save – then the second was a disaster for the former Raith Rovers goalkeeper.

This time Hibs skipper David Gray allowed the Sweden international to get on the end of a Griffiths corner and from a less than powerful drive the Easter Road goalkeeper allowed the ball to get past him.

It looked all over for the Leithers.

The Edinburgh side, with Steven Whittaker and Martin Boyle on for Gray and Marvin Bartley for the start of the second half, had an early chance soon after the break but Vykintas Slivka headed Boyle’s corner over the bar before Celtic defender Kieran Tierney clipped the post with a drive.

Hibs were handed a lifeline in the 59th minute when referee Kevin Clancy, after some hesitation, pointed to the spot when Boyle went down after a challenge by Boyata, with Stokes sending goalkeeper Craig Gordon the wrong way with his spot kick.

James Forrest and Dembele immediately replaced Patrick Roberts and Griffiths and both were involved in Celtic’s third goal in the 67th minute, when Scott Sinclair had miskicked a Forrest cut-back but only to the unmarked Dembele who fired in from close range.

More drama followed. Shaw replaced Slivka two minutes later and raced on to a Whittaker pass to slip the ball past Gordon for his first Hibs goal to set up a tense finale.

Laidlaw made saves from Forrest and Dembele but in another Celtic break two minutes from time the French striker took a pass from substitute Tom Rogic to knock in the fourth and keep hopes of retaining the domestic treble intact.