Will the Norwegians’ example herald a similar change in other countries? 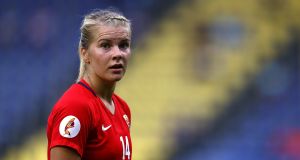 Norway star Ada Hegerberg welcomed the news that the women’s team are to receive the same pay as the nation’s men’s team. Photograph: Dean Mouhtaropoulos/Getty Images

Regarding ranking countries, Norway is generally rated close to the top – that is if you are ranking in terms of happiness, health care and all-round government policies.

From a football point of view, Norwegian women are ranked 14th while their men’s team are ranked at 73 in the most up-to-date Fifa World Rankings.

But now Norway rank number one in equal pay.

After efforts were made in this area by the USA women’s team and the Danish women’s team, it was Norway who stood tall. The women’s income was doubled from 3.1 million Norwegian kroner (€330,653) to a total of 6 million kroner (€639,975). It is important to note t the Norwegian men’s team donated a chunk of their commercial earnings to help facilitate this improvement.

Contrary to popular opinion, the men’s team were happy to do this. They acknowledge the women’s team are on the up as the players are regularly competing for European titles.

Stand-out player Ada Hegerberg and dynamic winger Caroline Graham Hansen were two of many people who welcomed this change.

A question that remains is how will the Norwegians’ example affect other FAs and the women’s game in general?

It’s not just Ireland’s women who are campaigning for equal treatment.

Brazil’s women’s footballers have seen an array of talent retire due to the lack of resources put into their team in comparison with the men.

Coach Emily Lima was bizarrely fired after a few months of inconsistent but stable results. In contrast with ex-Brazil coach Dunga who barely knew how to construct a team let alone manage a team like Brazil with such high expectations and pressure.

In an explosive letter written by former players, they said they had quit because they were “exhausted from years of disrespect and lack of support”.

Marco Polo del Nero, the CEO of CBF, remains the subject of an international arrest warrant after he was indicted on corruption charges by United States authorities probing corruption in Fifa.

Meanwhile, the women have also seen a reduction in players’ appearance fees while they also have no representative on the CBF board.

The US women’s national team are still embroiled in negotiations with US Soccer. The US team are the most prominent women’s team and even bring in a more significant revenue than the US men’s team, but US Soccer still refuses to acknowledge this.

The proposed agreement includes a sizable increase in basic pay for the players and improved match bonuses that could double some of their incomes, some to $200,000 to $300,000 in any given year, which will be greater in World Cup or Olympic years.

While the women’s players can claim significant gains, including in non-economic areas like travel and playing conditions, the new deal still does not make them equal with the men’s national team. That demand had been fundamental to the women’s campaign for much of the past year.

And then we reach Denmark, where, to put it nicely, the scene is one big mess. Friendlies and training sessions have been cancelled as protests intensified while the women’s team and the DBU are locked in an argument over who actually employs the Danish football team.

According to some reports, the men’s team offered part of their wage, but the DBU rejected this olive branch.

So, while all this disharmony reigned elsewhere, Norway decided to not just talk the talk but also walk the walk.

Sure, it is news that is welcome, but, is it something that should have happened earlier. As astronomical amounts of money are being spent in the men’s game, is it sustainable for this money to also be invested in the women’s game?

The money being invested is from countries and billionaires who actually are so wealthy they are bored. Sure, it would be nice to see investment in the women’s game too but I’m not sure if that is sustainable.

All economists know the bubble will eventually burst and, without proper investment and revenue occurring, I fear the women’s game will suffer more than the men’s game. If investment is stable and proper revenue is generated, then that is a plus for the women’s game. For now, we can all look to the example of Norway . . . after all, it is the happiest country in the world.