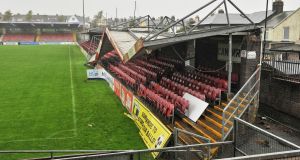 Cork City’s game against Derry City will go ahead at Turner’s Cross on Tuesday night despite the roof of one of the ground’s stands having been badly damaged as Hurricane Ophelia hit the city on Monday morning. The game will kick-off at 7.20pm and be shown live on RTÉ 2.

Part of the Derrynane Stand’s roof collapsed as high winds battered the south of the country and efforts to access the damage took time due to continued bad conditions and the need to check the safety of the structure.

An FAI statement released shortly before 8pm on Monday night confirmed that the game will go ahead, albeit with the Derrynane Stand closed due to structural damage, reducing the capacity from just over 7,000 to 6,000 for the potential title decider.

Think Kenny Shiels will get his wish pic.twitter.com/teOpHfOhBx

“An engineer visited the ground on Monday afternoon and while damage was done to a particular section, the rest of the stadium was not affected,” read the FAI statement.

“The engineer approved the fixture proceeding once the necessary works are completed on Tuesday morning in clearing debris and the Derrynane Stand remaining closed.”

Cork need just a point to secure their first league title since 2005 while Derry are chasing a European spot.