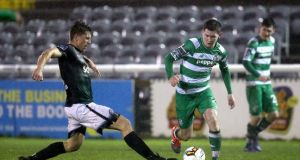 Aaron Greene scored a sublime winning goal to beat Shamrock Rovers who finished with 10 men at the Carlisle Grounds.

Former Hoop Greene collected Keith Buckley’s pass on the right on 74 minutes, cut inside a defender before thumping a left-footed shot to the net from 20 yards.

Much the better side up until that point, Rovers then had left-back Trevor Clarke shown a second yellow card four minutes later for a late tackle on Mark Salmon, their tenth red card of the season.

Despite playing into gale force wind and rain in the first half, Rovers passed the ball well, carving the first opening 11 minutes in when skipper Ronan Finn’s fierce shot was deflected for a corner. David McAllister and Clarke then combined on the Rovers’ left with Gary Shaw just unable to meet the inviting cross.

Shaw did connect with a low cross from Simon Madden 28 minute in though couldn’t direct it on goal. The big Rovers striker was injured in the incident and taken off on a stretcher after receiving treatment for several minutes.

Back in the other box, Rovers’ keeper Kevin Horgan shipped a kick to the head from Greene as he came to save a low cross from Gary McCabe after a mistake by Aaron Bolger gifted Bray the ball.

Showing no ill-effects, Horgan was promptly off his line right on 45 minutes to clear as Greene bore in on goal after runninh onto a ball over the top.

With the conditions having eased for the second half, Rovers continued to play the better football.

Cameron King cleverly dinked McAllister’s pass over a defender only to shoot wide nine minutes after the interval. A minute later, James Doona’s deep cross from the left bounced over off Peter Cherrie’s crossbar.

Bohemians claimed another impressive result on Friday night as Ismahil Akinade’s third goal of the campaign secured his side a 1-0 win over Dundalk at Oriel Park.

Keith Long’s side created the first opening after just two minutes when Paddy Kavanagh picked out Dinny Corcoran, but the striker’s effort was pushed around the post by Gary Rogers.

Torrential rain and a driving gale battered the ground and the elements almost worked to Dundalk’s advantage in the eighth minute, when Jame McGrath’s 30-yard shot caught the wind and sailed away from Shane Supple only to crash off his left-hand post.

The Lilywhites thought they had pulled ahead eight minutes later when David McMillan pounced to turn the ball home after Supple let a Robbie Benson shot spill from his grasp. A raised flag spared the goalkeeper’s blushes.

It looked like the teams would go in all square at the break, but Bohs hit the front in style when Akinade let fly from 25 yards to claim his third league goal of the season.

McMillan tested Supple in the opening stages of the second half before Sean Gannon, deployed on the right-wing, had a good shout for a penalty waved away in the 57th minute when his hooked effort looked to have hit the hands of a Bohs defender.

The visitors should have doubled their lead on the hour mark after a quick break on the left ended with Akinade squaring the ball across goal for Corcoran but Rogers stood tall to keep his side in it.

Stephen Kenny’s side continued to enjoy good spells of possession but they just couldn’t find a way through and a frustrating night was summed up in stoppage time when referee Derek Tomney waved away another appeal for a penalty after Chris Shields went down in the box.

Limerick retained their premiership status for next season thanks to a draw at the Markets Field.

It was a gane of three penalties - two for Galway, one of which was saved by substitute Limerick goalkeeper Freddy Hall.

The start was delayed for 25 minutes when it was discovered that there was a clash of colours. Referee Anthony Buttimer allowed sufficient time for matters to be ironed out and eventually Limerick appeared in green.

Galway had by far the better of the opening exchanges. David Cawley shot wide after eleven minutes and Rory Hale flew a 25 yards shot wide. The same player shot tamely at Brendan Clarke after 22 minutes. Galway fluffed a great chance after 27 minutes when Marc Ludden crossed but neither Eoin McCormack or Hale could make contact.

It took a superb save from Brendan Clarke to go low to stop a great shot by Gavan Holohan who had a goal disallowed for offside when the ball glanced off one of his team mates.

After all their dominance the visitors fell behind after 34 minutes.

Colm Horgan fouled Chiedozie Ogbene inside the box and Rodriquez slotted the penalty.

To add to their woes Clarke made a superb save from Kevin Devaney and the goalkeeper then had to go off injured.

Limerick struck a second goal two minutes before the break when Kenny’s cross was pushed past Winn by Ogbene.

If Limerick thought Galway might fade away such ideas were banished when Ronan Murray capitalised on a defensive error to make it 2-1 two minutes into the second half.

Goalkeeper Conor Winn did well to block efforts from Tosi and Ogbene, and just when the visitors looked like getting on terms substitute Limerick goalkeeper Hall saved a penalty from Murray. But when he then fouled Murray a few minutes later, Eoin McCormack converted the penalty to tie matters up.