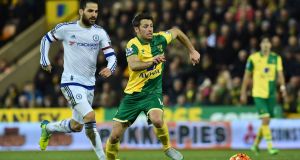 Had things gone a certain way, had he been seen in another light, it could have been so different for Wes Hoolahan.

“Ipswich were the only ones who showed real interest, they asked me back,” he says.

A Norwich City player of almost a decade, Hoolahan returns to Ipswich Town on Sunday for the East Anglian derby. He is 35. That Ipswich trial was half a lifetime ago, 1997 or ‘98. He’s been a long time running since, but he never did run back to Ipswich.

It was the beginning of this June in Dublin. Hoolahan was recalling early teenage years in the city having just completed a 12th season in British professional football. There were those five years or so at Shelbourne before that. He was entitled to a pause, to reflect.

But there is no let up, and as he speaks what reveals itself afresh are two of the Hoolahan qualities often submerged in the appreciation of his skilful ability and vision, or by the constant Wes starts/doesn’t start debate: his enthusiasm and perseverance.

Hoolahan could have been jolted by his early experiences in England, where the term trial carries its judgemental connotation with force. In his case the judgement was not favourable and it was already late, most of his physically bigger contemporaries had been heading across the water at 12, 13, 14.

Hoolahan went off to Millwall, to Sunderland, to Ipswich. He came back to Belvedere and stuck at it. He was 16 and, as he puts it, “hadn’t filled out yet”.

There will be a few who think that physical situation remains, though of course not when it comes to Hoolahan’s talent.

It has had many seasonal flowerings and has attracted its share of admiration. Swathes of fans in Norwich and Ireland cherish Wes Hoolahan, when they might merely approve of or tolerate others. In this large constituency, Hoolahan is not just a player, he is representative of a way of a playing.

Yet around all that has been the doubt, the debate. The discussion concerning Hoolahan has been going on almost as long as he has. It was there again when Martin O’Neill named his team in Cardiff 12 days ago: where’s Wes?

The answer was that Wes was on the bench and when subs were called for they were Glenn Whelan and Kevin Long. In victory the Hoolahan debate quietened.

But it will restart before Denmark. O’Neill will be asked again, and again he will reiterate that Wes Hoolahan plays under him, whereas he did not play under O’Neill’s predecessor, Giovanni Trapattoni. O’Neill may even point out that this time two years ago Hoolahan started in the fog of Zenica against Bosnia and that Hoolahan started in Dublin three days later. Those were major decisions by O’Neill, displays of trust.

Sceptics will counter that in both games Hoolahan was taken off. O’Neill will not have that, he will offer the first two teamsheets of Euro 2016 – Hoolahan started against Sweden and Belgium – and will make the obvious reference to the third game, against Italy. O’Neill will say that when he needed a creative intervention, he called for Hoolahan.

Of course that appeared a doomed selection when, seven minutes later – minute 84 – Hoolahan was free in the Italy box with only goalkeeper Salvatore Sirigu to beat. As Sirigu fell on the ball, O’Neill’s head drooped just as every Irish head in Lille and beyond drooped.

But at that particular moment what mattered most was what was going on inside Hoolahan’s head.

“I think I’d too much time to think about it,” he says of his saved shot. “In the end I kind-of placed it in the corner and the keeper guessed right, got his body on it. I thought that was it. The chance was gone.”

As the trial at Ipswich shows, there have been other times in his career when Hoolahan was allowed to think the chance was gone.

When he did get across the Irish Sea, in January 2006 aged 23, he joined Livingston in a Scottish Premier League relegation battle which they lost. Paul Lambert, the man who signed him, was sacked six weeks after the paperwork was done.

After five months, Livingston seemed over. Hoolahan was in limbo. Offered a chance to train with Blackpool, he thought it was a loan deal but discovered on arrival that it was actually a trial to see if he merited a loan deal. Blackpool, he says, “still could have sent me back”.

But as he does on the pitch, a characteristic you notice when you focus on him alone, Hoolahan kept going. His perseverance persuaded Blackpool manager Simon Grayson – later of Preston – to sign the Irishman. The pair were rewarded with a season that climaxed in play-off victory at Wembley.

Hoolahan was now in the Championship, playing twice against Norwich who chose to sign him. But then Norwich go down and the man who signed him, Glenn Roeder, departs. Then they lose 7-1 at home to Colchester on the first day of League One season 2009-10. If Hoolahan ever sold himself the dream of English football, this cannot have been it.

And then he gets dropped. As Norwich appoint the Colchester manager – Lambert – Hoolahan is in the reserves playing at Peterborough. He was 27 and no-one was asking why he wasn’t an international regular.

But that reserve game changed Hoolahan’s career. Lambert played the left-winger in the middle, as a number 10.

“I did well, made a goal, scored a goal,” he says. “And from then on I played virtually every game for the three or four years with Paul Lambert. I felt comfortable. I thought: ‘This feels like my position.’”

And in Lille, in the Euros, in the 84th minute, he was again in the middle. But it did not feel comfortable. Hoolahan and everyone else thought the one last chance they would get had just disappeared. Italy had not conceded a goal in their previous four matches. The Irish would be back in Dublin by lunchtime.

“I thought I’ve just got to get on with it, there’s minutes to go,” Hoolahan says. “Maybe I’ll get another chance; to redeem this. If we didn’t score and it’s nil-all and we’re out of the tournament, I think it would have haunted me forever.”

But then, as he adds quickly, “luckily enough, about 25 seconds later, Robbie Brady has passed the ball to Aiden [McGeady] and Aiden’s passed it me.”

Redemption, in the shape of a left-foot cross onto Brady’s head, was about to arrive. Hoolahan smiles, enthused. He had persevered. He still does.