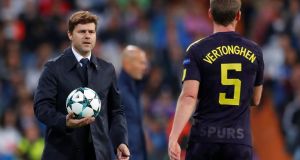 Mauricio Pochettino with Jan Vertonghen: the Tottenham manager has warned Jürgen Klopp’s men to be ready for a change of tactics and formation at Wembley. Photograph: Andrew Couldridge/Reuters

Mauricio Pochettino has suggested Jürgen Klopp and his players should be prepared to come up against a surprise change in formation and tactics when Liverpool face Tottenham Hotspur at Wembley on Sunday. The Spurs manager is emboldened by the success he enjoyed in changing his team’s approach against Real Madrid in the Champions League.

Tottenham departed the Bernabéu on Tuesday having earned a 1-1 draw with the European champions. It was a highly impressive display given they lined up in a rarely used 5-3-2 formation that had Eric Dier deployed in defence and Fernando Llorente given a starting role in attack.

Asked if he was considering another change of approach, Pochettino did not rule it out. “Maybe,” he said, in a noticeably relaxed and somewhat mischievous mood.

“It was amazing because some people close to us said: ‘When we saw the starting XI [against Real Madrid] we thought what the eff? What is going on in his mind?’ And then at the end of the game they say: ‘Oh, you are a genius.’

“It’s difficult to explain what we want to find in every game. It’s not easy to explain. It’s about trust. It’s about a feeling the manager and the coaching staff have. But after the game, if I win or lose, I cannot regret my decision.”

Pochettino’s tactical and selection decisions for the visit of Liverpool, a team he has yet to beat in seven attempts since becoming Tottenham manager in May 2014, will in part be dictated by the players available to him. Danny Rose could feature, having come on as a late substitute against Real for his first appearance of the season after recovering from a knee injury. He may start on the bench again, however, given Ben Davies, who has impressed at left-back in Rose’s absence, has recovered from illness.

Érik Lamela is also back in training as he continues his recovery from a hip complaint, but will not feature tomorrow, as is the case with Victor Wanyama, who remains out with a knee injury, and Mousa Dembélé, who sustained a hip strain during a training session in Madrid.

Pochettino expressed concern over Wanyama, who last featured for Spurs in August’s 2-1 defeat to Chelsea, and described Dembélé’s enforced absence as “difficult to explain”.