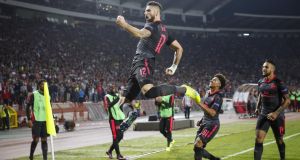 Olivier Giroud of Arsenal celebrates in front of the Arsenal fans after scoring the winner in their Europa League clash with Red Star Belgrade. Photo: Srdjan Stevanovic/Getty Images

It takes something unusual to create a moment of silence at Crvena Zvezda’s boistrous Rajko Mitic Stadium. Five minutes from the end of a Europa League match that scored higher on atmosphere than intrigue, Arsenal produced the game’s defining move and for a few seconds the sound cut completely as the home crowd took in the blow.

What a blow it was. The move of the night was carved by Jack Wilshere, who changed gear to burst past two opponents, exchanged passes with Theo Walcott, and picked out Olivier Giroud. It had been one of those nights where Arsenal’s hulking frontman looked a bit tortured, nothing going for him, touches astray, movement on the leaden side. But in that moment he adjusted his body to send an overhead kick into the net.

The Europa League is fast turning into a tonic for Arsenal. Giroud’s matchwinner enabled his hotch-potch selection to claim maximum points and hold a comfortable lead halfway through the group stage. Resting key players can backfire, but so far the B-siders have proved able to enjoy the Europa experience. All in all they handled a tricky night well.

Wenger had tried to brush off the atmosphere effect, suggesting his team was used to a warm ambience every week in the Premier League. But this was no run of the mill vibe. The stadium, packed an hour before kick-off, crackled with energy, the colourful choreography and bouncing fans shuddering behind the goal, as the teams emerged, and the decibels never dropped. If the Emirates Stadium is a smart and boring uncle, this Belgrade arena was like a punk cousin turning up the attitude.

It was a night for cojones, to borrow the word of the week. Arsenal’s mixed side, with a handful of kids and experienced fringe players thrown together, settled admirably enough. Wilshere’s enterprise and eye for a killer pass created early opportunities. Both Walcott and Giroud could not manufacture a clear shot, and then when Wilshere’s free-kick fell to Walcott in a perfect position, a weak shot was cleared by the goalkeeper Milan Borjan.

Arsenal came to the Serbian league leaders with a variation of the much juggled cup team selections Wenger has favoured for the Europa League this season. The variation came in a defensive compilation that was on the eclectic side. Rob Holding had unfamiliar partners on either side – Mohammed Elneny, a midfielder by trade, and Mathieu Debuchy, a full-back who has been injured for most of the past two and a half years. In the circumstances, reappearing all of a sudden after so long away from first-team football, the Frenchman found an impressive performance that potentially gives Wenger another defensive option.

This second string felt like an open invitation for Crvena Zvezda to try to pick off. The occasion seemed to almost overenthuse them, as they bounded into the box but were at times a bit too breathless to make cool decisions, shooting too early or passing with a wayward streak. Turning gallons of desire into the hard currency of shots on target was the challenge they had to master, and they began to get closer with a couple of smart chances. Richmond Boakye’s effort thumped against the frame of the goal. Arsenal’s ragged defence was exposed again as Nemnja Radonjic was free to slam in a shot which required an excellent save from Petr Cech.

Back came Crvena Zvezda. Cech again proved influential in smothering Nenad Krsticic’s header and repelling Radonjic. Late on Milan Rodic was sent off for a second bookable offence when he caught Francis Coquelin in the face with a stray arm. The 10 men of Crvena Zvezda could do nothing to stop Giroud making the most important noise of the night.